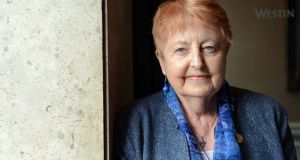 Dr Anne Merriman in Dublin this week: “None of us knows what’s going to happen after we die. Nobody has come back to tell us.” Photograph: Eric Luke

Anne Merriman, a former nun, has spent a lifetime looking after the dying across Asia and Africa: the experience has left her comfortable talking about death, including her own. “None of us knows what’s going to happen after we die. Nobody has come back to tell us,” Merriman (81) laughs. “I think that’s the biggest thing to accept – that we don’t know.”

Her extraordinary career has taken her from a Liverpool childhood to Ireland, then on to Nigeria, Singapore, Malaysia, Kenya, and finally to Uganda, which has been her home for over 20 years. Uganda is where she will end her days.

Hardy and cheerful, Merriman is far more concerned with protecting her life’s work than she is with contemplating the afterlife. Born to an Irish Catholic family, Merriman moved to Ireland at the age of 18 to join the Medical Missionaries of Mary in Drogheda and train at UCD and the Mater Hospital. From there, she travelled as a missionary medic to Nigeria, and later to Malaysia, Singapore and Kenya.

She was the first medical director of Kenya’s Nairobi Hospice, which opened in 1990. The posting opened her eyes to the crisis surrounding death in Africa. People were sent home from hospitals, told that there was nothing more that could be done. Some would never reach hospitals.

“It was not just in Kenya, but all over Africa,” says Merriman passionately. She pledged to develop a template for care for dying that could be used all over the continent.

Studies began in four countries before she finally settled on Uganda in 1993 – Hospice Africa Uganda, which now runs three hospices in the East African country, was the result. However, her hospices in Kampala, Hoima and Mbabara have few patients within their walls. Instead, the majority of work is done in people’s homes, which allows the dying to spend their final days with their families. Equally, it is more affordable in a country where many struggle to get any kind of healthcare, and where services struggle to cope with the numbers they do get to treat.

Her work earned her a Nobel Peace Prize nomination in 2014, an MBE from Queen Elizabeth and a long list of honorary fellowships and other international distinctions.

Since she opened her first hospice in 1993 – the fourth on the African continent – Uganda has been recognised internationally for its efforts to improve care for the dying, thanks in no small measure to Merriman. In the Economist’s 2015 quality of death index, Uganda ranked 35th out of 80 countries, and was one of only two African countries in the top 50, along with South Africa.

“I would want my legacy to be that the patient and family being the centre of care would reach everybody in the caring professions . . . I want it to be not just in palliative care but to go throughout care, throughout the world,” she says.

Education is the key. Hospice Africa Uganda offers bachelor degrees and diplomas in palliative care to healthcare workers from all across Africa, beginning with five-week initiation courses.

The terminally ill travel from all parts of Uganda for treatment, pain relief or counselling. Many are brought to and from their homes. The poorest get cash to buy essentials.

However, Merriman’s hospices are exceptions. Uganda has one doctor for every 250,000 people. One in 14 has Aids, leading to a rise in cancers. Palliative care must compete with a huge number of other demands.

“Uganda, just like most African countries, has many health challenges,”, says Dr Eddie Mwebesa, the newly appoined chief executive director of Hospice Africa Uganda. “It is always a struggle.”

In 23 years, Merriman’s organisation has helped 28,000 patients. “This is really a drop in the ocean, considering the 250,000 patients who need palliative care. So we are not yet there,” Mwebesa says.

The key is affordable and readily available pain relief. “First of all you have to have pain control to get through to them. Secondly, you have to have symptom control.” When she first came to Uganda, codeine was the principal source of pain relief, if not the only one. Merriman’s introduction of cheap oral morphine revolutionised the final days of patients.

Using a kitchen sink, Merriman replicated a formula she had developed in Singapore – morphine powder, water, preservative and a dash of food colouring to indicate the strength of the solution. In a modern laboratory, Hospice Africa Uganda produces all of Uganda’s morphine in partnership with the government. Oral solutions are cheaper than pills and injections. A week’s supply costs $2.

Still considered to be the best for those in severe pain, Merriman had to overcome serious resistance to morphine from local doctors, who feared addiction and overdose.

Today, the fruits of Merriman’s life’s work are not hard to find. On a Tuesday afternoon, a patient lies under a tree in the sunny garden, sharing a joke with a volunteer as she gently massages his feet.

On the verandah outside a daycare room, Jimmy Bukenya (33), a cheerful HIV patient, takes a break from a raucous card game to explain what life was like before he arrived three years ago.

Then he was bedridden and close to death. “I was in a bad condition,” he says. “I could not manage to move. I was just down on the floor . . . But the hospice has helped me, almost to save my life . . . it was not looking good, but now, I’m good.”

Asked what he thinks of “Doctor Anne”, he takes a long pause and quietly says: “For me, I just pray for her because of the support she has been giving me, for all of those years which I have been suffering. She is a very good friend to us.”

The Anne Merriman Hospice Africa Foundation is being launched on Sunday June 19th in the ground floor education and research centre at Our Lady’s Hospice and Care Services, Harold’s Cross, Dublin 6W, at 3pm. All are welcome.