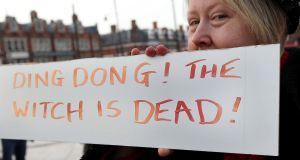 A woman poses behind a sign displaying the message 'Ding Dong! The Witch is Dead!' as she celebrates the death of former British prime minister Margaret Thatcher in Brixton last week. Photograph: Danny E. Martindale/Getty Images

'Ding Dong', the song which critics of Margaret Thatcher had hoped would top the British singles chart, reached number two this week.

As promised, the BBC played snippets of the song on its official chart countdown on BBC Radio 1 this evening.

The BBC has been under pressure from Tory politicians and from newspapers such as The Daily Mail and The Daily Telegraph not to play the song as it is disrespectful to the memory of Baroness Thatcher.

Others have accused the BBC of cowardice and even some Tory MPs said it was right to play the song given that Baroness Thatcher was somebody who believed in freedom of expression.

As a compromise, the BBC decided to play snippets of the song interspersed with news commentary on why it was so controversial.

The snippets were prefaced with a news item by BBC reporter Sinead Garvan. She said: "Tributes poured in from around the world when Margaret Thatcher died on Monday.

"However, there were those who threw street parties across the UK. An online campaign began in 2007 to get ‘Ding Dong - the Witch is Dead’ to number one in the charts the week that Lady Thatcher died."

The BBC then played five seconds of the song and Garvan continued: "Margaret Thatcher was Britain's first female prime minister and the longest serving of the 20th century. She strongly divided political and public opinion. Critics accused her of putting millions out of work and not caring about the poor in her time in charge. There were many who loved her and changed the UK for the better by taking Britain's failing economy and making it better."

She then went on to state that playing the song, like the woman who inspired the campaign, divided opinion.