Unionist parties stress importance of UK, SNP says it is no longer a ‘safe harbour’ 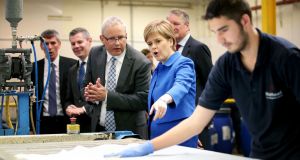 An independent Scotland would begin life with a far larger deficit than the rest of the UK, according to new figures released on Wednesday.

The annual government expenditure and revenue Scotland (Gers) figures show that in 2015-16 Scotland’s deficit – the difference between what the government raises in tax and what it spends – rose to almost £15 billion (€17.6 billion). Scotland’s deficit now stands at 9.5 per cent of GDP, up from 9.1 per cent in 2014-15. The overall UK deficit is 4 per cent.

Unionist politicians said that the Gers figures showed that Scotland benefited by being in the UK. Scottish first minister Nicola Sturgeon said the country faced a “challenging” economic environment, but she argued that Brexit showed the UK was no longer a “safe harbour” for Scotland.

“It is coming down to a clear choice between economic recovery with a continued place in Europe and the single market, or economic retreat with Brexit,” said the Scottish National Party leader, who has said that a second independence referendum is “highly likely” in the wake of the vote to leave the European Union.

Conservative secretary of state for Scotland David Mundell said the figures “show how being part of the UK protects living standards in Scotland”.

“Scotland weathered a dramatic slump in oil revenues last year because we are part of a United Kingdom that has at its heart a system for pooling and sharing resources across the country as a whole,” Mr Mundell added.

The Scottish and UK governments spent £1,200 a head more on public services in Scotland and on Scotland’s share of UK and overseas spending, while overall tax receipts fell by £400 a head.

For decades Scottish tax receipts were higher than the rest of the UK because of oil. Last year, North Sea revenue collapsed to £60 million, from £1.8 billion in 2014-15, amid a global oil market crash.

Overall, government spending as a share of the economy increased again to reach nearly 44 per cent of Scotland’s GDP, 4 per cent higher than the UK average.

Some of the spending attributed to Scotland is not under the control of the Scottish government. The Gers figures estimate Scotland’s defence spending at £3 billion – its population’s share of UK defence spending – but that figure could fall after independence.

But an independent Scotland would also need to make significant savings elsewhere and would have to “consider increasing existing taxes or introducing new ones”, said David Bell, professor of economics at Stirling University.