Depp may have severed own finger, according to email to doctor, court told 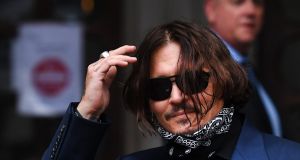 The Hollywood star Johnny Depp – who accuses his ex-wife Amber Heard of cutting off the tip of his finger when she hurled a vodka bottle – wrote at the time that he had caused the injury himself, the high court has heard.

On the third day of Depp’s cross-examination at the high court in London, the 57-year-old’s narrative of how the couple’s marriage disintegrated came under close scrutiny.

Depp is suing the Sun’s publisher, News Group Newspapers (NGN), and its executive editor, Dan Wootton, over an article that called him a “wife beater” and referred to “overwhelming evidence” that he had attacked Heard.

The libel case is scheduled to last three weeks. Heard, 34, has submitted details of 14 occasions during their relationship when she claims she was assaulted by Depp. He denies ever hitting her.

Depp had gone to Australia for the fifth film in the Pirates Of The Caribbean franchise in March 2015. Heard came out to join him. The row that erupted there, Depp said, was the moment when he first suspected their marriage was doomed.

Heard did not have a prenuptial agreement when she married Depp the previous month. “She was unwilling to sign a prenup,” Depp recalled. “My attorneys tried to get her to sign a postnup agreement.”

Depp said her reluctance was frustrating and that “she had started yelling at him because she had been asked to sign a postnup” after the wedding.

Sasha Wass QC, representing the Sun, put it to him that the dispute between the couple exploded because he had been drinking again and taking MDMA pills. Depp disagreed.

Wass said that in a violent confrontation, Depp held her by her hair, slapped her face, smashed her head against the fridge, spat at her, told her he hated her, threw bottles at the wall, shoved Heard against a ping-pong table which collapsed, and ripped a phone off the wall.

To each successive accusation Depp answered, “not true”, “no, ma’am”, or “fabrication”. In response to a suggestion that he had accused Heard of having affairs with the leading men in her films, he said “possibly”. He accepted he might have told her she had ruined his life.

Depp countered: “After Miss Heard threw the second vodka bottle at me, which severed the tip of my finger and crushed the bone, is when I began what I would feel as some species of nervous breakdown.”

That was the moment when Depp realised the relationship was over, he said. “I didn’t want to live at that time.”

Up to $150,000 damage was said to have been caused to the rented home. Depp was said to have painted walls with the blood on his finger, including drawing a penis on a picture. Depp said he did not remember that drawing.

Wass read out a message Depp sent to his doctor at the time. In it he accused Heard of “having an obsession with herself” and only being interested in success and fame.

Depp’s email went on: “I’m so very sad. I cut the top of my middle finger off, what should I do? I’m so embarrassed ?”

Asked about the message, Depp said: “That doesn’t mean to say I myself did it.”

Wass replied: “Are you serious?”

The court was also shown photographs from December 2015 that appeared to show Heard with the beginning of two black eyes. Her medical notes were also read out in which she said she had been head-butted by Depp.

Asked about the alleged injuries, Depp said: “She was swinging at me wildly as I was walking away. She was hitting me on the neck. I turned. So the only thing I could do was run away or try to get my arms around her.

“When I did [turn] it seems there was a collision. That is the only potential injury. There was no intentional head-butt. The collision was head to head.”

Asked whether he had ever told Heard’s father, “Yes, I f**ked up and I went too far in fights,” Depp said: “Yes, it’s possible.”

He insisted he had never hit Heard. “I may have said: ‘I’m sorry that things escalated as they do.’”

Earlier the court heard that Depp had thanked Heard for trying to get him “clean” during an attempt at drug detoxification on his private island and praised her “heroism”.

In August 2014, the couple, by then engaged, flew to Depp’s private island in the Bahamas. The aim was for Depp to withdraw from Roxicodone, a prescribed drug to which he was addicted, the court heard.

Heard followed the nurse’s instructions to deliver a strict regime of medicines to help Depp break his addiction.

One day Heard texted the nurse seeking help, saying Depp was “all of a sudden flipping” and that he had “started pushing me and I don’t know what to do”, the court heard.

Depp told the court that he remembered being in a “great deal of pain” and suffering “uncontrollable spasms”.

Wass asked: “Did you hit and push Miss Heard when you were flipping?”

Depp replied: “I did not push Miss Heard or attack her in any way. I was not in any condition to do so.”

Shortly afterwards Depp sent an email to Heard’s mother saying he was “beyond thankful” for her daughter’s help on the island, the court heard. “Your daughter has risen far above taking care of this poor old junkie,” he wrote.

Her efforts amounted to “heroism”, he added. Heard had the “strength of 1,000 men. I would have gone for a swim and swallowed a big drink of ocean without her. It was Amber and Amber only who got me through it.”

Depp also sent Heard a text saying: “Thank you so much for getting me f**king clean, baby.” In court, Depp said he had sent it “to make her happy”.