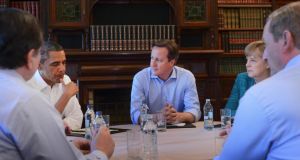 Turkey, South Africa and Russia have demanded explanations from London that British spies have intercepted their diplomats and politicians at every turn, including minute-by-minute tracking of their calls and emails during a G20 economic conference four years ago.

The revelations – this time against the UK’s government communications headquarters (GCHQ) monitoring station in Cheltenham, rather than US spying agencies – are the latest to come from former US National Security Agency worker Edward Snowden.

Detailing the extraordinary lengths to which GCHQ officials went to bug the London G20 conference in 2009 called by then British prime minister Gordon Brown, Mr Snowden revealed that bugged internet cafes were even set up in the conference hall.

Intercepted messages
Diplomats’ and politicians’ messages sent on BlackBerries were intercepted in real time and used in rushed briefing papers for British ministers to give them every advantage during the negotiations.

Bruised by international criticism over the Taksim Square crackdown, Turkey responded furiously to the allegations, rebuking a British diplomat in Ankara by saying an eavesdropping operation on a Nato ally was “scandalous”.

Then Turkish finance minister Mehmet Simsek, according to Mr Snowden, was of particular interest to London because ministers wanted to know more about Ankara’s attitude towards reform of financial services rules in the wake of the banking collapse.

Despite the anger in Ankara, Moscow and Pretoria, the Snowden allegations made few, if any, waves in Britain, with politicians on all sides taking the view that “spies spy”, though there is anger that the information was made public.

‘Cast a cloud’
However, the allegations dominated Russian media coverage of the opening day of the G8 summit, with one state-controlled Moscow TV station saying that “the spy scandal can cast a cloud” over the gathering.

“From a technical point of view, spying on those negotiating on the territory of a country doesn’t present any great difficulties,” said Nikolai Kovalev, former head of Russia’s FSB spy agency.

But the affair would be greeted as poor form among spies, he added: “To avoid diplomatic and international scandal security agencies are forbidden from doing this. And usually they don’t do it.”

Mr Snowden, who answered questions online for Guardian readers yesterday from his base in Hong Kong, defended his decision to leak information about US surveillance of phone, email and web traffic. “It’s important to bear in mind I’m being called a traitor by men like former [US] vice-president Dick Cheney, ” he said.

“This is a man who gave us the warrantless wiretapping scheme as a kind of atrocity warm-up on the way to deceitfully engineering a conflict that has killed over 4,400 and maimed nearly 32,000 Americans, as well as leaving over 100,000 Iraqis dead. Being called a traitor by Dick Cheney is the highest honour you can give an American.”