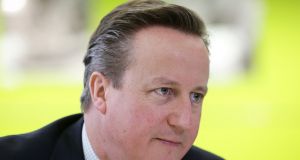 Information releasd shows David Cameron paid more than £400,000 in tax on an income of more than £1 million over six years from 2009 to 2015. Photograph: Yui Mok/PA Wire

British prime minister David Cameron faced fresh questions over his personal finances after Downing Street revealed he had been given a £200,000 (€247,000) gift by his mother following his father’s death which could potentially avoid inheritance tax.

Number 10 said that the two payments of £100,000 in 2011 came on top of the £300,000 Mr Cameron inherited from his father Ian as the prime minister’s mother Mary attempted to “balance” the sums received by their children.

The information was revealed as part of an unprecedented release of information about Mr Cameron’s finances, which showed that he paid more than £400,000 in tax on an income of more than £1 million over six years from 2009 to 2015.

The payments by Mary Cameron to her son in May and July 2011 were given tax free, and will only become liable to inheritance tax of up to 40 per cent if Mr Cameron’s mother dies within seven years of handing over the money.

The release of the information by Downing Street followed the Panama Papers data leak and the revelation that Mr Cameron and his wife Samantha made a $19,000 profit on shares in an offshore trust set up by Mr Cameron’s father.

Mr Cameron has been angered by the focus on his father’s offshore business interests, insisting it was a “fundamental misconception” that the Blairmore Holdings trust had been set up to avoid tax.

But Labour seized on his father’s offshore business links to question the source of Mr Cameron’s inheritance and the gift from his mother.

A Labour Party spokesman said: “The week started with a moral crisis at the heart of the Tory party and has now ended with a scandal at the very top of Government.

“The prime minister has been forced to admit that not only had he benefited from a company that paid no tax in 30 years, but that he may pay no tax on any benefits potentially gained from the same company.

“David Cameron can’t hide any more, he needs to come to Parliament on Monday and put the record straight.”

The figures show that, on top of his income as prime minister, his 50 per cent share of the rental income on the Camerons’ family home in London amounted to £46,899, he received £9,834 in taxable expenses from the Tory party and £3,052 in interest on savings in a high street bank.

The figures reveal that when he first entered Downing Street in 2010 he benefited from a £20,000 tax-free allowance as part of his £142,500 salary, although in subsequent years he did not take advantage of the long-standing perk available to occupants of Number 10.

The information shows that Mr Cameron earned enough to benefit from the cut in the top rate of tax from 50p to 45p. The cut, announced in 2012 for people earning more than £150,000, came into effect in April 2013.

Mr Cameron said he was publishing the information to be “completely open and transparent” about his financial affairs.

The disclosure came after he admitted botching the handling of the row over his finances, telling Tory activists it had “not been a great week”.

Although Mr Cameron’s gross salary as Prime Minister stood at £142,500 between 2010 and 2015, the variations in the taxable amount came through the way his pension contributions were treated and the different approaches taken to the £20,000 tax-free allowance.

Mr Cameron voluntarily cancelled out the allowance by declaring the equivalent amount as taxable income between 2011-12 and 2013-14 before waiving it entirely from 2014-15.

The figures show that the Camerons receive rent of more than £90,000 a year on the Notting Hill property.

Mr Cameron’s savings benefited from the sale of £72,000 of shares when he entered No 10, with the gains on some shares wiped out by losses on others, resulting in a capital loss of £2,507, and around £40,000 in cash from an account with a stockbroker.

Labour leader Jeremy Corbyn said he would publish his own tax return “very, very soon” and insisted there were “no surprises there” .