David Cameron all but kowtows to visiting Chinese leader

Xi Jinping feted by Britain with pomp, circumstance and flattery 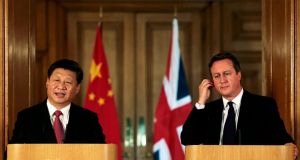 When Britain’s first ambassador to the Chinese court, George Macartney, entered the imperial tent on September 14th, 1793, he saw a thousand Mandarins and foreign emissaries kowtow before the emperor.

They fell to their knees three times – and each time they knelt, they bowed three times, touching their foreheads to the ground on each of the nine bows.

The ambassador was having none of it, saying he would bend one knee to his own king but would only bend two to God. His refusal to kowtow to the emperor has been blamed by historians for effectively shutting Britain out of China for more than a century.

David Cameron has taken no such risk during this week’s state visit by Chinese president Xi Jinping. The prime minister has performed the 21st-century equivalent of the kowtow, layering on the pomp, circumstance and flattery.

Despite concerns about human rights and last week’s news that thousands of British steelworkers are set to lose their jobs, partly because currency manipulation allows China to flood the market with cheap steel, Cameron was all smiles when he made a joint appearance with Xi on Wednesday.

“I reject the idea you either have conversation on human rights and steel or you have a strong relationship. I want both,” Cameron said.

According to Human Rights Watch, Xi has presided over “an extraordinary assault on basic human rights and their defenders with a ferocity unseen in recent years”. But in London he basically suggested that, though he was doing his best, nobody’s perfect.

“China attaches great importance to human rights,” Xi said. “We have found a path suited to China’s conditions. There is always room for improvement in the world.”

On Tuesday, Xi paraded down the Mall in a gilded carriage, in which he was discreetly seated on the side opposite human rights protesters.

As he made his way to address the joint Houses of Parliament, he was greeted by hundreds of pro-government Chinese demonstrators, many of them bused in, wearing government-issued red T-shirts.

Before he sat down, however, the president issued an unsubtle warning to Britain not to waver in its embrace of China, wrapped in the language of a fortune cookie.

“As an old Chinese adage goes: ‘Opportunity may knock just once; grab it before it slips away.’ In Britain, you also have a famous saying: ‘A wise man turns chance into good fortune.’”

They also have a saying in Britain: He who sups with the devil should have a long spoon.

By Wednesday, however, any reserve had been abandoned as Cameron and his ministers trumpeted tens of billions of pounds worth of contracts that were Britain’s reward for their courtship of Xi.

The biggest and most controversial is the one-third stake, worth £6 billion, that China is taking in a new nuclear power station at Hinkley Point in Somerset.

The state-owned China General Nuclear Power Corporation (CGN) and the French energy giant EDF will jointly fund the plant’s construction, which will be the first European nuclear plant to be built since Japan’s Fukushima disaster in 2011. The two companies will also cooperate to license a Chinese-designed nuclear reactor and to build it at a site near London.

Among those believed to be uneasy about the Chinese nuclear deal are Britain’s intelligence chiefs, not least on account of China’s record of cyber attacks on western companies and government agencies. GCHQ, which is responsible for signals intelligence, has let it be known that it will seek untrammelled access to the Chinese-run nuclear plants.

“Why would they want to turn off a nuclear power station in which they had some ownership? It doesn’t seem terribly logical to me, except in extreme circumstances in which that would be the least of the UK’s problems,” he told the BBC.

The US is also more sceptical of China’s promises and believes, for example, that Chinese hackers have continued to target US companies despite a recent bilateral agreement to stop spying on each other’s businesses.

The Obama administration made known its frustration with London earlier this year when Britain became the first western country to join the Beijing-backed Asian Infrastructure Investment Bank.

Washington commentators have poured scorn on Cameron’s display of obeisance to Xi in London this week, which contrasts with the approach of German chancellor Angela Merkel to her country’s relationship with China.

In Beijing last year, Merkel addressed the issue of human rights publicly, using a speech to university students to invoke the fall of the Berlin Wall 25 years earlier.

“It’s important that citizens can believe in the power of the law, and not the law of the powerful,” she said. “It’s important to have laws on this regard, that function as a guardian of principles. You need on open, pluralistic and free society in order to shape the future successfully.”

That speech came a day after Merkel signed a series of trade and investment deals with China, including agreements on two new Volkswagen factories and the sale of 123 Airbus helicopters.