Police looking at links to other properties going back decades 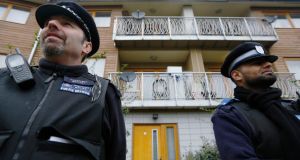 The couple arrested in London over allegations that they enslaved three women, including one Irish, have been linked to 13 other properties, police have confirmed.

Up to last month, the couple and the three women lived in a Lambeth Council-owned ground-floor flat in Peckford Place near Brixton, but few, if any of the neighbours knew them. Confirming that it is looking at the couple’s links to other properties “going back decades”, the Metropolitan Police said the links at this stage are to the couple, and not to the three women. The information, however, will raise suspicions that the women – who, the police have confirmed, lived in an atmosphere of fear and intimidation – were moved between the properties.

One neighbour, Daniel Hewett, who has lived in Peckford place for 27 years, told The Irish Times last night that he had never seen them on the streets. However, he said he had occasionally seen “what seemed to be an old woman looking out from behind a blind” from the sitting-room in the flat. Lambeth Council “will end up with questions to answer”, he said: “That building is only up eight, or nine years, so the council moved them all in.”

The three women are a 57-year-old Irish woman, a 69-year-old Malaysian and a 30-year-old Briton. On Saturday police confirmed the three women initially did not want to see the couple prosecuted.