Farage claims Newark outcome a ‘big result’ for party despite losing by some 7,000 votes 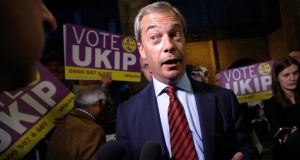 UK Independence Party (UKIP) leader Nigel Farage speaks to the media after the declaration of the Newark by-election at Kelham Hall near Newark. UKIP came second in the byelection but trailed the Conservatives by 7,000 votes. Photograph: Luke MacGregor/Reuters. 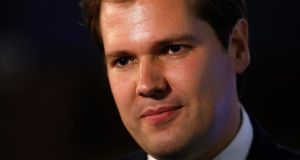 British prime minister David Cameron has won a significant by-election in England, beating the UK Independence Party by some 7,000 votes

The result in Newark in Nottinghamshire, caused by the resignation of a disgraced Conservative MP, Patrick Mercer last month, was declared shortly before 4am this morning.

Robert Jenrick, an executive with the Christie’s auction house in London, won for the Conservatives with 17,431 votes. UKIP’s Roger Helmer was second with 10,028 votes ahead of Labour’s Michael Payne on 6,842 votes.

Nevertheless, UKIP’s leader, Nigel Farage, who had urged his party last weekend to deliver victory in “a Krakatoa moment that would change the face of British politics”, said the outcome was “a big, big result for us”.

However, there is little doubt that the 7,000 gap is higher than the Eurosceptic UKIP had hoped, since earlier in the night many of them believed that it could be kept to two thousand, or a little more.

Several hours before the result was declared, Mr Farage, who attracted major attention when he arrived at the count-centre in Kelham outside Newark shortly after midnight, remained upbeat: “The volcano is still rumbling.”

The Conservatives’ victory is the first time that the party has won a by-election when in power for a quarter of a century - when William Hague - now foreign secretary - won a seat in Yorkshire in 1989.

The 7,000 vote victory enjoyed by Mr Jenrick is a far cry from the 16,000 majority enjoyed in 2010 by Patrick Mercer - who had to quit after a cash-for-questions scandal, but it was warmly welcomed by the Conservatives.

A clearly delighted and relieved Conservative transport secretary Patrick McLaughlin said it was “a fantastic result” for a party in office to win a by-election.

Mr Cameron will argue to Conservatives that the result represents a high-water mark for UKIP and that the Conservatives can fend off their challenge in the House of Commons elections in May next year.

However, some fearful Conservatives will draw a different view, fearing that a similar UKIP performance in dozens of Tory heartlands next May could scupper the chances of scores of their MPs

Up to now, Mr Cameron has rejected calls by some of his MPs for official, or unofficial pacts with UKIP - but, in reality, UKIP has no interest in either.

UKIP finished a distant fifth in Newark in the 2010 general election: “We were 25,000 votes behind the Conservatives then. Today, we are just a few thousand behind, that shows the change,” said Mr Farage.

The Conservatives could be faced with another by-election by the end of the year in South Cambridgeshire if former health secretary Andrew Lansley is nominated as the UK’s next European Commissioner.

Mr Lansley enjoyed a 10,000 majority, though Mr Farage said that “it would not be tenable” if Mr Cameron tried to get through to the general election due in May next year without a by-election.

“That would not be tenable, I don’t think for a constituency to be without an MP,” he told The Irish Times, speaking outside the count-centre early this morning.

Lessons had been learned from the Newark campaign, he insisted, though he said the party had been unable to transfer resources into the constituency until late May.

Both UKIP and Labour were happy to concentrate on the efforts the Conservatives were forced to make to hold onto Newark - the 44th safest seat in their ownership, up to yesterday.

“David Cameron came here four times during the campaign, that is unprecedented. And he isn’t going to be able to do that in every constituency next year,” said Labour’s Chris Bryant.

The Nottinghamshire constituency is formed of Newark, a market town, along with a collection of well-off towns and villages that have been traditionally Conservative.

UKIP’s vote increased substantially in Newark itself in the European Parliament elections, so much so that it actually won more votes there than did the Conservatives.