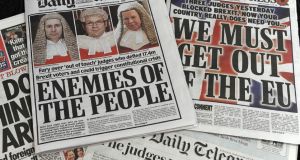 A selection of the front pages of British newspapers taken on Friday following the UK high court ruling yesterday that the Conservative government do not have the power on their own to trigger Article 50 of the Lisbon Treaty. Photograph: Benjamin Fathers/AFP/Getty Images

Theresa May faces a Brexit byelection after Conservative MP Stephen Phillips resigned his seat in protest against her handling of the process of leaving the European Union.

Mr Phillips, who has represented the Lincolnshire constituency of Sleaford and North Hykeham since 2010, campaigned for Leave in June’s referendum but he has been unhappy with the government’s attempt to deny parliament a vote before article 50 of the Lisbon Treaty is invoked.

“It has become clear to me over the last few months that my growing and very significant policy differences with the current government mean that I am unable properly to represent the people who elected me.

“This decision has been a difficult one and I hope that everyone will respect the fact that I have tried to act in the best interests of all of my constituents,” he said.

Mr Phillips complained last month that the government’s refusal to allow MPs to vote in advance of formal Brexit talks on where the negotiations should end up was “undemocratic, unconstitutional and likely to exacerbate the divisions in our society”.

Mr Phillips’s resignation came as the prime minister sought to reassure EU leaders that she remains on course to trigger article 50 before the end of next March, despite Thursday’s high court decision that parliament must vote first to authorise the move.

Ms May called European Commission president Jean-Claude Juncker and German chancellor Angela Merkel said that, although the government was disappointed by the judgment, it was confident about an appeal to the supreme court next month.

If the government’s appeal fails, it will have to introduce legislation in parliament to authorise the start of Brexit talks, and opposition MPs and peers have warned that they will seek to amend or delay any such Bill to prevent a “hard” Brexit.

“We will seek, with other parties, in both the House of Commons and the House of Lords, to amend the legislation such that parliament would say to government that it should pursue a soft Brexit not a hard Brexit and that there should be some means by which the British people can have a say on the final deal when the negotiations with the EU are finally completed in the years ahead,” Liberal Democrat MP Nick Clegg said.

The high court decision produced lurid headlines in some British newspapers, with the Daily Mail publishing pictures of the three judges on its front page, under the headline “Enemies of the People”.

The Daily Telegraph also pictured the judges on its front page, under the headline “The judges versus the people”. Articles in a number of papers vilified the judges, with the Daily Mail highlighting the fact that one of them was gay.

“Judges in the high court are there to interpret the law regardless of their personal views and that is what they have done. There is a constitutional process which must be followed.

“Some of the headlines in today’s newspapers personally attacking the judges who heard this case are unacceptable. As lord chancellor, Liz Truss should not stay silent,” he said.

Straying too far into politics

Ukip leadership contender Suzanne Evans suggested on Friday that judges should be sacked if MPs believed they were straying too far into politics.

“I have been concerned for quite a while that the judiciary is becoming more politically active. I think there needs to be some kind of recall mechanism for them, possibly. I think they need to be more accountable and I think this case actually highlights it very well. I don’t see why they shouldn’t be accountable to a select committee in parliament,” she told the BBC.

During a visit to Berlin, foreign secretary Boris Johnson described the growing parliamentary drama over its role in the government’s Brexit strategy as “sturm und drang” or storm and stress.

“I don’t think it will interfere with the timetable for that process,” he added.

“I hope very much that the consequences of the high court ruling won’t lead to extending the whole process, and dragging things out,” he added, repeating Berlin calls for legal clarity – and soon – from Downing Street.