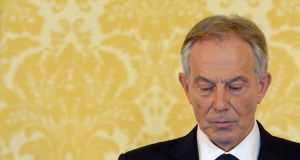 Former British prime minister Tony Blair at a news conference in London on Wednesday, following the damning report by Sir John Chilcot. Blair voiced “sorrow, regret and apology” for those killed in Iraq, but said he acted in good faith and did not regret toppling Saddam Hussein. Photograph: Stefan Rousseau/AFP/Getty Images

A defiant Tony Blair defended his decision to go to war in Iraq in 2003, following the publication yesterday of a devastating report by Sir John Chilcot which mauled the ex-prime minister’s reputation and said that at the time of the 2003 invasion Saddam Hussein “posed no imminent threat”.

Looking tired, his voice sometimes croaking with emotion, Blair described his decision to join the US attack as “the hardest, most momentous, most agonising decision I took in 10 years as British prime minister”.

He said he felt “deeply and sincerely . . . the grief and suffering of those who lost ones they loved in Iraq.

“There will not be a day when I do not relive and rethink what happened,” he added.

But, asked whether invading Iraq was a mistake, Blair was strikingly unrepentant. “I believe we made the right decision and the world is better and safer,” he declared. He argued that he had acted in good faith, based on intelligence at the time which said that Iraq’s president had weapons of mass destruction. This “turned out to be wrong”.

Blair also said the Iraq inquiry – set up by his successor Gordon Brown back in 2009 – shot down long-standing claims that he had lied about the war to the British public and cynically manipulated intelligence. Where there had been mistakes they were minor ones involving “planning and process”, he said. He said he “couldn’t accept” criticism that British soldiers died in vain.

It also revealed that in a remarkable private note sent on July 28th, 2002, Blair promised Bush: “I will be with you, whatever.”

The head of the Iraq war inquiry said the UK’s decision to attack and occupy a sovereign state for the first time since the second World War was a decision of “utmost gravity”. Chilcot described Saddam as “undoubtedly a brutal dictator” who had repressed and murdered many of his own people and attacked his neighbours.

But he was withering about Blair’s choice to sign up to a military plan drawn up in the immediate aftermath of 9/11 by the US president, George W Bush, and his neo-con team. Chilcot said: “We have concluded that the UK chose to join the invasion of Iraq before the peaceful options for disarmament had been exhausted. Military action at that time was not a last resort.”

The venue was the Queen Elizabeth II conference centre in Westminster. As families of service personnel killed in Iraq welcomed its strong contents, anti-war protesters kept up a raucous chorus of “Blair liar!”.

The report sheds fresh light on the private discussions between Blair and Bush in the run-up to war. The report says that after the 9/11 attacks Blair urged Bush “not to take hasty action on Iraq”. The UK’s formal policy was to contain Saddam’s regime.

But by the time the two leaders met in April 2002 at Bush’s ranch in Crawford, Texas, the UK’s thinking had undergone “a profound change”. The joint intelligence committee had concluded that Saddam could not be removed “without an invasion”, with the government saying Iraq was a threat “that had to be dealt with”.

It added: “This is the moment to assess bluntly the difficulties. The planning on this and the strategy are the toughest yet. This is not Kosovo. This is not Afghanistan. It is not even the Gulf war.”

At times, Blair’s notes read more like stream of consciousness than considered policy documents. The note continued: “He [Saddam] is a potential threat. He could be contained. But containment . . . is always risky.” It says “we must have a workable military plan” and proposes a “huge force” to seize Baghdad.

Asked what “whatever” meant, Blair said his support for Bush was never unconditional or unqualified. He said that he had persuaded the US president to go down the “UN route”. Blair also linked his actions in Iraq with the ongoing global struggle against Islamist terrorism. According to Chilcot, however, Blair shaped his diplomatic strategy around a “military timetable” and the need to get rid of Saddam. – (Guardian service)