Labour are doing better in the polls, but unfortunately for them, so are the Tories 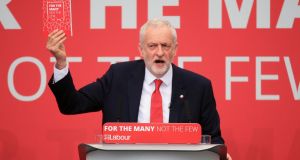 Jeremy Corbyn at the launch in Bradford of the Labour Party manifesto for the General Election. Photograph: Danny Lawson/PA Wire

Much of Labour’s manifesto was already familiar after last week’s leak of a draft version but the full document highlights the starkness of the choice facing British voters on June 8th. The manifesto is not, as the right-wing media claim, a blueprint for a return to the 1970s and is not nearly as radical as Michael Foot’s in 1983.

But Labour is proposing a dramatic increase in the role of the state, funded by an extra £48.6 billion a year in taxes, and tens of billions of pounds in extra borrowing. It would, according to the Institute for Fiscal Studies, take tax as a proportion of GDP to its highest level for 70 years.

Nobody earning less than £80,000 a year would pay more income tax and there would be no increase in VAT or national insurance contributions. The biggest new source of revenue would come from gradually increasing the corporate tax rate to 26 per cent, which the party says would bring in an extra £19.4 billion a year.

Labour would nationalise the water industry, along with Royal Mail and the railway network. It would abolish third-level tuition fees and spend more on housing, health and social care.

On Brexit, the party would not seek to reverse the referendum result but promises a different approach to negotiations, with an emphasis on “retaining the benefits” of the single market and the customs union. The manifesto rejects the idea of leaving the EU without a deal.

“Labour recognises that leaving the EU with ‘no deal’ is the worst possible deal for Britain and that it would do damage to our economy and trade. We will reject ‘no deal’ as a viable option and if needs be negotiate transitional arrangements to avoid a ‘cliff-edge’ for the economy,” it states.

Jeremy Corbyn introduced the manifesto with a confident speech in Bradford, contrasting what he called Labour’s campaign of hope with the Conservatives’ appeal to fear. Polls show that many of Labour’s policies are popular but Corbyn is a drag on his party’s fortunes.

Labour supporters have been heartened in recent days by polls showing the party’s support rising above 30 per cent. The same polls carry better news for the Conservatives, however, with support edging towards 50 per cent.