Putin says Russia is against expanding club of nuclear states, including Korean Peninsula 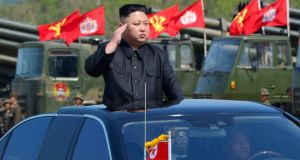 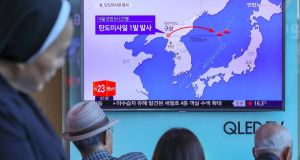 People watch a news programme showing a graphic of a North Korean missile launch, at a railway station in Seoul on Sunday. Photograph: AFP Photo/Yonhap

North Korea triumphantly announced the missile tested at the weekend was capable of being fitted with a “large, heavy nuclear warhead”, a major advance in its bid to develop a long-range rocket able to hit the United States.

Mr Kim warned the US “should not disregard or misjudge the reality that its mainland and Pacific operation region are in [North Korea’s] sighting range for strike”.

American president Donald Trump has described stopping the development of such a missile as a key foreign policy goal of his administration but he has yet to come up with a strategy on stopping the North, short of beefing up UN sanctions and pressuring China to do more to make its neighbour and ally behave.

If the claims are verified, the Hwasong-12 test marks a significant step forward in North Korea’s bid to develop an intercontinental ballistic missile.

South Korean and American experts believe it is a single-stage intermediate-range ballistic missile based on a new type of liquid-fuel engine.

“If the information that has been reported about the test is correct, the missile has considerably longer range than its current missiles,” physicist Dave Wright wrote on the Union of Concerned Scientists site. “If that same missile was flown on a standard trajectory, it would have a maximum range of about 4,500km.”

The report has yet to be confirmed but what has rattled many experts is the pace at which the missile programme is advancing.

After the North carried out a new high-thrust rocket engine test in March, experts reckoned it would take a year to get to the stage it reached with Sunday’s test, not just two months.

The missile flew 787km, reaching a maximum altitude of 2,111.5km, Korean Central News Agency said. It withheld some crucial details about velocity, according to the South Korean defence ministry.

A spokesman, Moon Sang Gyun, told the Yonhap news agency it was still unlikely that North Korea has re-entry technology that could return a warhead safely back into the atmosphere.

The test puts South Korea’s new president, Moon Jae-in, into a difficult spot. The liberal leader said last week he was ready for dialogue with North Korea, but the test has made this goal more challenging.

American, Japanese, French and British navies are gathering for joint war games in the Pacific, while the USS Carl Vinson, an aircraft super-carrier, is also engaging with South Korean navy ships in waters off the Korean peninsula.