Cameron sets out key ‘needs’ in talks on UK/EU relationship

Negotiations could give Britain ‘best of both worlds’, prime minister claims 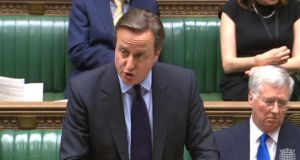 Negotiations on a reformed relationship with the European Union could give Britain “the best of both worlds”, David Cameron has told the House of Commons. Photograph: PA

Negotiations on a reformed relationship with the European Union could give Britain “the best of both worlds”, David Cameron has told the House of Commons.

In a statement on last week’s meeting of the European Council, the prime minister said the talks were going well and that there was now a clear process of negotiation leading up to a summit in Brussels on December 17th.

“I’ve set out the four things we need,” Mr Cameron said. “First, on sovereignty: we want to have more control. Secondly, we must make sure the EU adds to competitiveness, not taking away from it. Third, we need to make sure the EU works for those outside the single currency, protects the integrity of the single market and makes sure we don’t face discrimination.

“And, lastly, we need to make sure [we] are tackling abuses of the right for free movement, as well as making sure our welfare system isn’t an artificial draw for people who want to come to Britain.”

Mr Cameron has promised to hold a referendum on Britain’s EU membership before the end of 2017, and yesterday former defence secretary Liam Fox called for cabinet ministers to be allowed to campaign on either side of the debate.

Dr Fox told the BBC that, even if the prime minister demanded a uniform approach from his cabinet, individual ministers would find a way to make their views known.

Dr Fox also said: “I think that in any case, people will find a way to make their voices heard, and the idea that you can gag people during a process like the referendum, given the multiple ways that we’ve just been discussing about getting information out, is unrealistic.”

Labour leader Jeremy Corbyn called on Mr Cameron to work more closely with other EU leaders on a common approach to the migration crisis, suggesting that he should heed a call from Church of England bishops to accept 50,000 refugees, rather than 20,000.

In response, Mr Cameron said the bishops were wrong and that agreeing to accept more refugees would only serve to encourage greater numbers to make the journey to Europe.

“The right thing to do is to take 20,000 refugees from the camps,” he said, “and if you become part of the mechanism of distributing people around the European Union, you’re encouraging people to make that dangerous journey.”

He also made it clear that any move to offer Turkish citizens visa-free travel to the EU would not apply to Britain because it is, like Ireland, not part of the Schengen travel area.