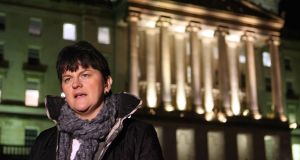 First Minister Arlene Foster: she says opinion polls indicate there is no appetite for a Border poll

After the Brexit vote the one area of agreement among Northern Ireland politicians was, as Martin McGuinness said, that the North is now in “uncharted waters”.

There is concern on a number of fronts: in relation to constitutional matters, cross-Border trade, investment, jobs, possible Border controls, taxes and tariffs, the future of £420 million (€510m) of EU peace process funding, the financial markets, agriculture, the end of the Common Agricultural Policy, extradition and security among other issues.

The North, after three years of frequently deadlocked government, appeared to be entering a period of stability following November’s Fresh Start Agreement. However, this result has put the issue of a Border poll on a united Ireland back on the agenda, with calls for a plebiscite from senior Sinn Féin politicians.

Northern Secretary Theresa Villiers and DUP First Minister Arlene Foster say opinion polls indicate there is no appetite for such a plebiscite. But, goes the response, if Scottish National Party leader Nicola Sturgeon is arguing the majority Remain result in Scotland justifies another referendum on independence then there is equal justification for a referendum on a united Ireland.

The result also will test whether senior politicians such as British chancellor George Osborne and Minister for Foreign Affairs Charlie Flanagan were correct in warning that Brexit would financially damage sectors.

Villiers may contend, as she did yesterday, that the Common Travel Area will stay between Britain and Ireland.

Osborne has argued, however, that the logic of Brexit was that there must be Border tariffs, which would damage trade.

He also said the freedom of people from Britain and Northern Ireland to travel within the EU would end.

Now the battle has been fought, the British and Irish governments may play down such warnings and limit the damage as far as possible.

One unanswered question is what will happen to the EU funding of £420 million up to 2020 to support peace and reconciliation projects in Northern Ireland and along Border counties.

Alliance leader David Ford said exiting the EU would undermine North-South extradition processes. The PSNI Chief Constable did not quite go that far, saying it could make extradition a “bit clunky” and more costly.

This monumental “uncharted” decision will feed into many other aspects of life. It’s hard to deny that it will create instability and uncertainty at a time when Northern Ireland requires the opposite.