Brexit: Use of Orlando killings to push Leave vote condemned

Leave.EU lobby: ‘Act now before we see Orlando-style atrocity here before too long’ 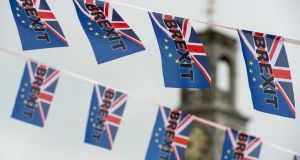 “Leave” campaigners for a Brexit from the European Union were condemned as “shameful and cowardly” by the “Remain” camp on Monday after they used the massacre in an Orlando gay club to push for a vote to quit the bloc.

Leave.EU, one of several groups pushing for the UK to leave the EU, posted a picture on its Twitter feed of Islamic State militants with the words, “Islamist extremism is a real threat to our way of life. Act now before we see an Orlando-style atrocity here before too long,” written across it in capital letters.

Shooting suspect Omar Mateen, a US citizen of Afghan descent, killed some 50 people with an assault weapon at the gay dance club in Orlando, Florida, early on Sunday.

He dialled 911 as he began the assault to claim allegiance to Islamic State.

“This is a shameful and cowardly poster,” Hilary Benn, foreign affairs spokesman for the opposition Labour Party, said in an email.

“It takes courage to stand by your principles and your friends when they are attacked, whether in Orlando, Paris or Brussels. ”

“Your constant lying is bad enough but this is despicable, a new low even by your gutter standards,” tweeted Peter Coles, an astrophysicist at Sussex University, whose Twitter picture includes the banner “Scientists for EU.U.K”.

Another Twitter user, Richard Lindsay, described the post as “utterly repugnant,” while Illustrated Lawyer tweeted: “This is simply abhorrent and should be removed immediately.”

Leave campaigners, who have made immigration the centrepiece of their drive to leave the EU, have repeatedly accused the Remain camp of scaremongering, dubbing prime minister David Cameron’s repeated warnings of damage to Britain’s economy if it leaves as “Project Fear”.

An email asking for comment and to clarify that the campaign had posted the advertisement also went unanswered.