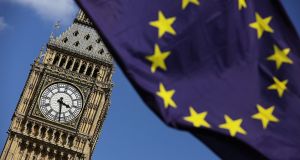 Prospects: A Norway-style relationship with the European Union now seems remote so some foreign policy experts favour an approach that would deepen Britain’s involvement in international organisations such as Nato and the UN. Photograph: Daniel Leal-Olivas/PA Wire

Two weeks on, it’s striking how many disappointed Remainers still cling to the hope that Brexit may never happen. Some keep faith with the prospect of a second referendum to reverse the decision. Others are banking on inertia, or the power of economic forces to slow the process of withdrawal to a halt. It may be time for them to move on.

Everything that has happened since the referendum has made a retreat from Brexit less likely – and even the prospect of a Norway-style relationship with the European Union now seems remote.

Both candidates for the Conservative leadership have ruled out maintaining free movement of people from the EU, a prerequisite for remaining part of the single market. And Labour is so far adrift of its moorings that it, too, is moving towards a hardline policy on immigration in an effort to hold on to working-class voters who backed Leave.

If Britain is indeed set to leave the EU, its policy-makers need to start thinking about its future place in the world. Its relationship with the EU is part of that, along with matters closer to home, such as the future of Scotland and the implications for Northern Ireland and British-Irish relations.

Outside the EU, Britain will have to decide how significant a global player it wishes to be, and to what extent it is prepared to devote resources to foreign policy. One option is simply to retreat into itself, accepting that it will now be a medium-sized power adrift from its closest neighbours. This might appeal to pessimists who voted Leave in protest against globalisation or who cherish a narrow view of national sovereignty.

Most Leavers, however, have promised a bright future based on enhanced co-operation with the rest of the Anglosphere and deeper relationships with other Commonwealth countries.

The Commonwealth is less sentimental about its relationship with Britain than Britain is about the Commonwealth. But some existing structures could be beefed up, including the Five Eyes system of intelligence sharing with the US, Canada, Australia and New Zealand.

Some foreign policy experts believe that adding a political dimension to Five Eyes could help secure Britain’s status as a global player.

Others argue that Britain’s best bet lies in capitalising on the advantages of Brexit by offering lighter financial regulation in the City of London and adopting a more flexible approach to human rights. London is already the favoured destination for much of China’s capital, and British expertise could be crucial in internationalising the Chinese currency.

Freed from the constraints of the EU’s common foreign policy, Britain could deepen its long-established ties with authoritarian Gulf states. Such a mercantilist approach to foreign policy might produce short-term gains, but would come at a cost to Britain’s international standing.

The most ambitious foreign policy mavens favour an activist approach that would deepen Britain’s involvement in international organisations such as Nato and the UN, and a doubling down on the special intelligence and defence relationship with the US.

Some even suggest that Britain should position itself as the EU’s best friend after Brexit, although lengthy, difficult withdrawal negotiations could make that more difficult.

No economic forecasters are currently predicting economic growth for the UK, so maintaining the value of its commitment to spend 2 per cent of GDP on defence could be difficult. The collapse of the pound in relation to the dollar has made some military equipment more expensive.

As well, Leave campaigners’ promises of more cash for the health service and protection of farm incomes and scientific research grants after Brexit could make extra spending on defence and diplomacy politically impossible.