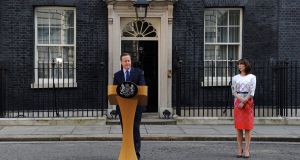 British prime minister David Cameron, next to his wife, Samantha, announces his resignation outside No 10 Downing Street after Britain voted to leave the EU. Photograph: Facundo Arrizabalaga/EPA

Britain has seen one of the most tumultuous days in the country’s political history following its decision to become the first member state to leave the European Union.

An hour after the referendum result was announced yesterday morning, David Cameron said he would step down as prime minister in October, after the Conservative Party has elected a new leader.

“I want to reassure everybody that in my view as a result of this Britain will continue to be a great European power, leading discussions on foreign policy and defence and intelligence-sharing and all the work that currently goes on to make our world safer,” he said.

“But there is simply no need, in the 21st century, to be part of a federal system of government based in Brussels that is imitated nowhere else on Earth. It was a noble idea for its time; it is no longer right for this country.” Before lunchtime, Labour leader Jeremy Corbyn’s future was in doubt after two MPs submitted a motion of no confidence in him.

Labour MPs have criticised Mr Corbyn’s lacklustre role in the Remain campaign but he cannot be dislodged from the leadership by a confidence motion alone. Fifty-five MPs would have to unite to challenge him and, even then, the final choice of leader lies with ordinary party members rather than parliamentarians.

As the pound tumbled to its lowest level against the dollar since the mid-1980s and stock markets across the world plummeted, Bank of England governor Mark Carney promised to make a further £250 billion (€308 billion) available to prop up the financial system if necessary.

England and Wales saw majorities voting to leave the EU but Scotland, Northern Ireland and Gibraltar voted to remain inside. Scotland’s first minister, Nicola Sturgeon, said she was seeking an urgent meeting with the European Commission to discuss options to keep Scotland in the EU.

“I want to make it absolutely clear that I intend to take all possible steps and explore all options to give effect to how people in Scotland voted, in other words to secure our continued place in the EU and in the single marker in particular,” she said.

Ms Sturgeon said the referendum’s outcome was “democratically unacceptable” because the whole of Scotland voted to remain inside the EU and many people had voted against independence in 2014 on the basis that they would remain in the EU.

She said another Scottish independence referendum was now likely.

EU leaders will meet in Brussels next Tuesday and Wednesday to consider the fallout from the referendum as the heads of the EU institutions promised to continue with the European project.

In a joint statement, the presidents of the European Commission, European Parliament and European Council, together with the Dutch prime minister, Mark Rutte, whose country holds the EU rotating presidency, said that while the British vote was an “unprecedented situation”, the remaining 27 member states continued to be “bound together by history, geography and common interests”.

“We regret this decision but respect it . . . This is an unprecedented situation but we are united in our response. The union of 27 member states will continue. The union is the framework of our common political future,” they said.

Asked if the British referendum marked the beginning of the end of the European Union, European Commission president Jean-Claude Juncker replied “no”, though he declined to take further questions from journalists. German chancellor Angela Merkel hosts the French and Italian leaders together with European Council president Donald Tusk in Berlin on Monday ahead of the meeting of all 28 EU heads of state on Tuesday in Brussels.

EU ambassadors, commissioners and high-ranking officials are expected to meet in Brussels tomorrow ahead of markets reopening on Monday.

Dr Merkel described the outcome as a “blow for Europe” and a “blow for the process of European unification”, but she cautioned against drawing “instant and simple conclusions” from the referendum.

President Barack Obama said the US relationship with both Britain and the European Union would endure in the wake of the referendum.

Democratic presidential candidate Hillary Clinton said the US must first safeguard against any economic fallout at home at “this time of uncertainty” and underscore its commitment to both Britain and Europe.