Brexit: passion is a vote-killer and gives people the creeps 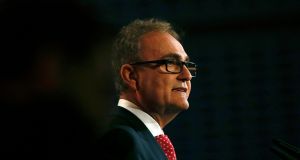 John Longworth: the director general of the British Chambers of Commerce has been suspended after he called for Britain to leave the European Union. Photograph: Stefan Wermuth/Reuters

Professional footballers who hound referees after every decision against them do not believe he will change his mind. They want to influence his subsequent decisions. This strategic airing of grievances is a sly feature of elite sport. But it is a feature. It counts as a skill. The grandest clubs work on it as they work on their eye of a needle passing movements.

To be generous to those campaigning for Britain’s secession from the EU, maybe they are engaged in a political version of this gamesmanship. When they allege a brusquely partisan interview of Boris Johnson, the London mayor whose case for Brexit turned to smoke under interrogation on Sunday morning television, they hope broadcasters will soften their scrutiny of them.

When they seethe at the British chambers of commerce for forcing out its Eurosceptic leader, John Longworth, it is to cow other pro-EU bodies.

Their resentment of “Project Fear”, their loose talk of dirty tricks by Downing Street, their decision to comport themselves like smacked children in a restaurant: it all serves an end.

The foot-stamping of recent weeks is not tactical but suggestive of an authentic brittleness that voters will punish when they start paying attention nearer the referendum on June 23rd.

So what have Eurosceptics been doing all these years, if not preparing? Leavers and Scottish nationalists deny any likeness, but the parallels between the two movements increasingly insist on being noticed. Both sides spent so much time and energy securing a referendum that none was left over to hone their arguments when it came.

They bonded among themselves during those years in a way that cloaked material disagreements on basic questions of detail. And they are so sure of the rightness and historic inevitability of their missions that practical quibbles seem tawdry and beside the point to them – a vice that mars the work of European federalists too, and designers of the single currency especially.

At least Scottish nationalists had the excuse of the euro crisis, which stole their best answer as to which currency their putative state would use. No external shocks have discombobulated Leavers in the same way. Their complacency and irreconcilable world views are responsible for the failure to even agree whether Brexit should denote total liberation from the EU and its acquis communautaire – if such a thing is attainable – or continued membership of the single market. This mush cannot survive the white heat of a referendum campaign, and does not deserve to.

In politics, believing in something intensely can be the worst way of getting it done. Passion can motivate hard work on matters of detail, but it can also serve as a giddy distraction from it.

This is how a politician as shrewd as Alex Salmond came undone by the referendum on independence two years ago. Scotland’s former first minister was not stumped by elementary questions of currency and finance despite his life-long immersion in the nationalist cause, but because of it. The backslapping company of fervently like-minded people is a poor environment in which to learn the science of persuasion.

Rage at the media

One MP has tabled a formal Freedom of Information request to find out whether Mr Longworth succumbed to pressure from Downing Street. You half-expect a rant against chemtrails and water-fluoridation next week.

At best this exhibitionist paranoia will mobilise Eurosceptics of a populist bent; unequal turnout is the Leavers’ surest way of winning. More likely, it will turn off two voters for each one it inspires. Splenetic venting is a perverse tactic for a cause already associated with eccentricity, just as Mr Johnson was always a perverse choice of frontman for a cause already associated with risk.

None of this implies that Remainers are all Ciceros making unanswerable interventions in the opening burst of the campaign: they have their own complacency and their own monoculture. But they also have the excuse of not wanting this referendum in the first place. Leavers have craved it for decades and now expect to be wet-nursed through it. Behind their anger is either gamesmanship or a plain lack of preparation that is only starting to be exposed. – (Copyright The Financial Times Limited 2016)