Brexit fails to shift tribal loyalties on the Falls Road 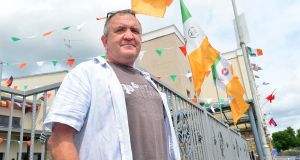 Secretary of the Felons Club Gerry Scullion: “My first instinct was not to vote at all, but I’ll probably be voting stay.” Photograph: Arthur Allison

Sipping an afternoon pint in the Felons Club on the Falls Road in west Belfast, Brian Gray is in no doubt about why the DUP is in favour of Brexit.

Outside, the club is decked with Tricolours for last night’s European championship game between Ireland and Italy. The flagpoles on the roof hold the Tricolour, the Palestinian flag and the Basque flag.

On the Falls there is no sign of flags for the Northern Ireland soccer team, who made it through to the final 16 of the Euros the previous evening.

Gray, from Andersonstown, is with a number of friends. He says Arlene Foster – referred to as “Queen Arlene” by another in the club – and her party are opposing British membership of the EU for reasons of bigotry.

“I’ll be voting to stay in. You see the likes of your DUP, to me their main thing is, if we come out it’s going to mess the Free State economy up. That’s something they’d enjoy very much. I think that’s a bigoted attitude towards the whole thing.”

Gray says there is a lot of apathy among nationalists towards the issue of Brexit. His drinking companion, Barry Burns, also from Andersonstown, immediately proves his point. “Me, I’m not voting at all. I’m just refusing to vote and that’s it. Too much voting in this place now, so there is. I’ve been voting Sinn Féin since I was 18 years of age, but this I don’t care about.”

Gerry Scullion, secretary of the Felons Club, is a reluctant “Remain”, although the damage caused to the union by a Brexit “could be a positive”.

“My first instinct was not to vote at all, but I’ll probably be voting stay. I wouldn’t be a great enthusiast of what Europe is now. It was a force for good. Now it’s a force for reactionary forces against workers rights, rather than for them.”

Apathy is not hard to find. In The Rock bar, on the corner of the Falls and Rockmore Road, Seán Duffy (34) is preparing for the evening crowd. He says politics in the north is “all balls”, with little ever changing, apart from marginal increases in support for either nationalists or unionists.

Duffy says he probably won’t vote, but could see how a Brexit could possibly be “better for a united Ireland” because it would spell “the end of the union”.

He doesn’t detect much interest in the issue among his customers either. “People are more interested in the football.”

Yet most of those around this area of West Belfast are in favour of remaining in the EU, even if the reasons differ. Teresa Kelly is out pushing her grandchildren, Danny and Connie, in a pram along the Falls. She is pro-Remain. “Don’t ask me why, it is just better to stay in. They’re trying to keep all the immigrants out, but the Irish were immigrants before.”

While she says “nobody’s fussed” about the referendum, she adds that some who did not vote in Stormont or Westminster elections will be voting today.

Although there are red Leave and blue Remain posters hanging in Belfast city centre, there are few posters on the Falls. A red Leave poster stuck on a roundabout is not from the official Brexit campaign, but is instead from Eirigí, a left-wing republican group. It is urging a vote to leave “for independence; for democracy; for freedom; for Europe; for peace”.

Mark Williams, a shop steward for the union Unite, also takes a left-wing perspective but is firmly for Remain.

“Unite are backing stay, we’re doing a big campaign. See these Conservatives? They’re going to thrash every workers’ right. That’s what they are doing it for.”

Others are just tuning into the debate following recent broadcast debates and local leaflet drops by parties such as Sinn Féin.

Alicia McKee works a stall selling 1916 centenary memorabilia, as well as signed copies of Gerry Adams’s My Little Book of Tweets in the Kennedy shopping centre across the road from the Felons Centre.

She says she is going to vote to remain in the EU, but approaches the issue from an almost purely republican point of view. “I’m coming from a perspective where I want a united Ireland. I’m sort of thinking it’ll be better for us to get that while we are in Europe.

“I think it is better if we vote to stay in. I just want to see a united Ireland, and my view is the best way to tackle it is from the inside. It would be too risky to try and do it from outside.”