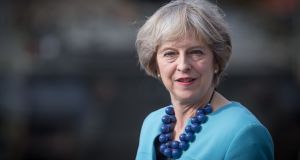 Britain’s prime minister Theresa May: her government has agreed to allow MPs to debate its Brexit negotiating position before the start of formal exit talks next year but has ruled out a parliamentary vote that could veto the triggering of article 50. Photograph: Matt Cardy/PA Wire

Britain’s exit deal with the European Union will “very likely” go to MPs for ratification before final agreement, Downing Street has said. The prime minister’s spokesman confirmed as “the government’s view” an assertion made in the High Court on Tuesday by a lawyer representing the government in a legal challenge demanding a parliamentary vote before formal exit talks begin.

“The government view at the moment is it is very likely that any such agreement will be subject to ratification,” James Eadie QC told the court.

The government argues that it does not need parliamentary approval before triggering two years of formal Brexit talks by invoking article 50 of the Lisbon Treaty. But Mr Eadie said any agreement on Britain’s future relationship with the EU would probably be subject to British laws on the ratification of treaties.

“The treaty must be laid before parliament at least 20 days before ratification. Both houses of parliament will have the opportunity to vote on it,” he said.

“The view within government is that it is very likely that this treaty will be subject to the ratification process in the usual way. Most of them are. It is a pretty rare event for the things to take effect immediately upon accession, as it were.”

Mr Eadie said it was unlikely, although possible, that both the EU and the British government would agree that the Brexit agreement would not require parliamentary ratification.

Theresa May’s government has agreed to allow MPs to debate its Brexit negotiating position before the start of formal exit talks next year but has ruled out a parliamentary vote that could veto the triggering of article 50. Conservative MPs are divided over the best approach to take in negotiations, with some Brexiteers accusing the chancellor, Philip Hammond, of showing weakness.

Mr Hammond has raised questions about the potentially adverse economic impact of stringent immigration controls, and his officials floated a proposal for Britain to continue making payments into the EU budget in return for special access for some sectors to the single market.

Sterling immediately rose against other currencies in response to the news that MPs, two-thirds of whom opposed Brexit, would have a say on the final exit deal. The pound has fallen by almost 20 per cent against the euro and the dollar since June’s referendum, and fell sharply after Ms May suggested Britain was heading for a “hard Brexit” outside the European single market and customs union.

The latest inflation figures show a sharp rise, but analysts said prices would rise further as the full impact of the pound’s devaluation began to manifest itself in higher prices for shoppers.