Brexit campaign in North ‘played on racism and emotions’ 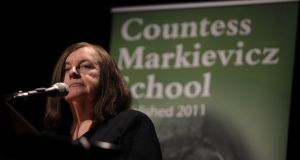 Bernadette McAliskey: the lifelong republican and socialist was conflicted about how to vote in EU referendum but went for Remain based on practical reasons. Photograph: Paula Geraghty

Lifelong republican and socialist Bernadette McAliskey was conflicted about how to vote in the EU referendum but in the end plumped for Remain.

She agreed with the left analysis of her friend Eamonn McCann that, in essence, there is little difference between British imperialism and European imperialism and so a plague on both their houses.

She went for Remain based on practical on-the-ground reasons: primarily what Leave might mean for the hundreds of immigrants she works with in Dungannon.

“I voted Remain notwithstanding all the things that I know about the European Union,” she said. “You have to make the decision in this context, in this time: does it bring us forward or back?”

She didn’t “really see how strengthening the Little Englander mentality with the whole imperialist history behind it and a racist agenda” would strengthen the left position. She wasn’t saying that “everybody in the Leave campaign or even the majority of them were racists . . . but every racist voted to Leave”.

Brexit had alarmed them, said Ms McAliskey. “Our main work is in reassuring them that at present nothing is going to change in their entitlements.”

The workers mainly come from Lithuania, Poland and East Timor, the last-mentioned have Portuguese citizenship. Most have EU status.

There were some serious racist attacks in the past but the work of Step and others have helped to reduce such incidents in Dungannon. There is a degree of assimilation.

Polish father and son Jan (49) and Darek Drodzd (19) also had concerns about Brexit but, it must be said, they also focused on last night’s Poland v Portugal game.

Down the line though he is concerned for the business he had built up over five years. The UK outside the EU probably would mean extra tariffs to import the Polish sausages and meat, fish, bread and other delicacies, he said. “That could threaten my business.”

Palestinian immigration lawyer Abed Natur, who is married to an Irish woman and based in Dungannon, said the referendum result was very disappointing.

“I think the Brexit campaign played on the emotions of people, it played on xenophobia and racism,” he said.

Mr Natur said that many who were based here for more than five years could have applied for British residency but because of their EU standing hadn’t felt the need to. His advice in this time of uncertainty is to apply now.