UK Prime Minister Boris Johnson has said that his government "will obey the law" while promising to take the UK out of Europe by October 31st with or without a deal. Video: Reuters 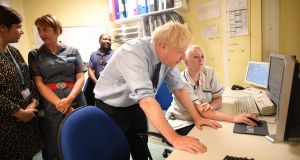 British prime minister Boris Johnson looks at a computer during a visit to a hospital in Harlow, north of London. Photograph: Getty Images

Opposition parties could stage a vote of confidence in the Government next week in a bid to thwart a no-deal Brexit, a senior SNP MP has said.

Stewart Hosie said the plan — to put in place an interim government to secure a Brexit extension — appeared to be the only way to ensure Britain did not “crash out” of the EU on October 31.

However, he acknowledged that in order to succeed, it would require all the opposition parties to get behind it.

But while the SNP have indicated they could support a temporary government led by Jeremy Corbyn, the Liberal Democrats and many of the Tory rebels who had the whip withdrawn have made clear they are not prepared to put the Labour leader in No 10.

Mr Hosie however warned that they may have no other option if they were serious about preventing a no-deal Brexit and securing a further extension to the Article 50 withdrawal process.

“We have to do that because there is now no confidence that the prime minister will obey the law and seek the extension that parliament voted for only a few weeks ago,” he told the BBC Radio 4 Today programme.

“If we are serious about the extension, that is the only game in town.”

So far, they have been reluctant to go for a confidence vote fearing that under the terms of the fixed-term parliaments act Mr Johnson could, if he is defeated, delay a general election until after October 31st by which time Britain will be out of the EU.

Mr Hosie said the plan could work if an alternative government capable of commanding a Commons majority had been “pre-agreed” before the confidence vote.

Some MPs have suggested that a more consensual figure such a Ken Clarke or Dame Margaret Beckett could stand a better chance of winning cross-party support.

However Mr Hosie said it was “self-evidently the case” that as the leader of the second largest party Westminster, Mr Corbyn should have the first chance of forming an administration.

“If another name came forward that was acceptable to everybody — a Ken Clarke or Dominic Grieve type figure — then self-evidently that would be a good thing to do,” he said.

“But it is also self-evidently the case that the second largest party should have the first chance to form that administration.

“If Jo Swinson and the Lib Dems are actually serious about their stopping Brexit position then they need to stop playing political games, get on board with everybody else.”

Mr Hosie said that the sole purpose of such a government would be to obtain a further Brexit extension and then hold a general election.

“All of the opposition parties and the Tory rebels need to be on board with a single plan,” he said.

“Yes, we could a have vote of no-confidence, yes the Government might well be brought down, but there is then still the issue of an interim administration in order to seek the extension to Article 50.

“If that is not in place and effectively pre-agreed, then we might end up having the general election on Boris Johnson’s terms, allowing him to run down the clock and crash out without a deal.”

It was unclear to what extent other opposition parties were ready to back the idea.

Asked if he thought there would be a confidence vote next week, Labour’s shadow communities secretary Andrew Gwynne told Today: “I don’t know.”

The threat of a no-confidence vote raises the prospect that Tory MPs could be forced to abandon their party conference which opens in Manchester on Sunday.

Unusually, the Commons will be sitting while conference is taking place after MPs refused to grant the Government the customary recess in the bitter aftermath of the Supreme Court ruling that Mr Johnson’s suspension of Parliament was unlawful. – PA