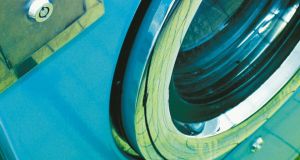 The Xeros washing machine looks like a standard machine such as this one, but washes clothes with reusable plastic beads that absorb dirt.


Wash days may never be the same again, following the design of a washing machine that uses less than two cups of cold water, promises to clean everything, and uses practically no detergent.

First conceived in the University of Leeds, the washing machine is made by Xeros, which is to raise £40 million on the London-based AIM stock market.

Thirty of the machines are already in operation in commercial laundries in the United Kingdom, the United States and a number of continental countries, though Xeros hopes to have 120 more in place by the end of the year.


Domestic application
The £40 million sought from investors will help to drive Xeros’s ambitions to produce machines that are cheap enough to make to sell to ordinary homes – potentially a multibillion pound market.

“If all UK households converted to Xeros cleaning, that would save approximately seven million tonnes of water per week, equivalent to 5.6 million swimming pools per year, equal to taking 1.4 million cars off UK roads,” the Rotherham-based company claimed.

Because “bead” cleaning works in cold water, heating is not required, which cuts energy use in half, says designer Stephen Jenkins. The amount of detergent used is approximately half of that normally used in commercial laundries.

The beads are “particularly good at clinging to dirt and grease” and can be used for 500 washes before recycling, though they might need a monthly wash to keep them. Just 20 or so beads may remain stuck to clothes after the wash.

1 US passengers fly into Dublin: ‘I’m here for six days. I guess I’ll have to stay inside’
2 Maureen Dowd: Biden has his limitations but he’s no Trump
3 Covid-19: Restrictions on travelling abroad may last several years, expert warns
4 Quarantine process to be tightened as health officials grow nervous
5 Stunning image of comet Neowise captured over Dublin Bay
Real news has value SUBSCRIBE