BBC will not play 'Ding Dong' in full amid Thatcher campaign 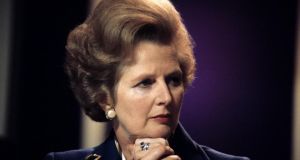 The BBC has said it will not play Ding, Dong the Witch is Dead — a big seller following the death of Margaret Thatcher - in full during this weekend’s chart show.

The broadcaster has found itself in the middle of a row over whether to play the Wizard Of Oz track which celebrates the demise of the former Conservative British prime minister.

An online campaign has driven sales of Ding Dong! The Witch Is Dead and the latest placings released by the Official Charts Company show it had sold 20,000 copies and was at number four on Wednesday night.

A spokesman for the corporation said: “The BBC finds this campaign distasteful but does not believe the record should be banned.

“On Sunday, the Radio 1 Chart Show will contain a news item explaining why the song is in the charts, during which a short clip will be played as it has been in some of our news programmes.”

Meanwhile the controversial song has entered the Irish weekly top 40, premiering at number 33. It is one of a number of versions of the song making sales in Ireland since the death of Lady Thatcher.

RTE said it will not ban the song. A spokeswoman confirmed it was played on their pop music station 2fm today. “The song is not play-listed on 2fm as it doesn’t necessarily fit with the station’s usual output, but there are certainly no restrictions on the song and DJs are free to play it as they see fit,” she added.

Dick Doyle, chief executive of Irish Record Music Association (Irma), which compiles Ireland’s music singles countdown, said it would only take 300 or 400 sales to get into the top 40.

“It would take a few thousand to reach number one at this time of year,” he said. “That figure might be higher at Christmas but this is around the quietest time of the year.”

Mr Doyle said he did not expect the track to reach the Irish top spot, judging by previous trends for novelty or campaign-driven entries. “It would take a huge number of downloads to get up there,” he said. “It would be very difficult to do that.”

Chart-Track, which collects sales information for the Irish countdown, said the “surprise entry” — originally recorded in 1939 — was the oldest track to ever make the top 40.

The company said several other versions of the Wizard Of Oz song were also selling this week, the other most notable version by Ella Fitzgerald.

The late former prime minister divided opinion and while many have mourned, some have seen her death as a cause for celebration, prompting a download surge for the song.

John Whittingdale, the chairman of the Culture, Media and Sport select committee, said the song should not be played.

“This is an attempt to manipulate the charts by people trying to make a political point,” he told the Daily Mail. “Most people find that offensive and deeply insensitive, and for that reason it would be better if the BBC did not play it.”

But another Tory member of the select committee, Philip Davies, said the song should be played. He described the campaign as “pathetic”, but added: “It’s not for the BBC to define on what basis something is in the the charts.”

The BBC has in the past refused to play hit songs if they were regarded as offensive.

The song’s suggestive lyrics caused a stir when it was released in 1984 and upset Radio 1 DJ Mike Read who declared it “obscene” — none of which stopped it reaching number one and selling millions of copies.

The saucy French ode to free love holds a place in the history books as the first number one to be banned, with its amorous lyrics and breathy vocals proving too much for the BBC.

The Sex Pistols — God Save The Queen

This perfectly-timed punk classic caused all kinds of problems when it was released around the time of the Queen’s Silver Jubilee. It looked set to be number one as the nation prepared to party but was eventually held off the top spot by Rod Stewart — sparking stories that the sales figures had been massaged to prevent embarrassment.