Andrea Leadsom trails May despite support of hard-right 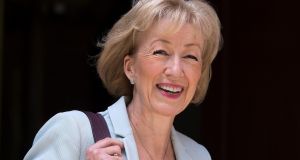 When Andrea Leadsom appeared before supporters and the media at Millbank Tower yesterday morning, it was, all but her most devoted fans agreed, a disaster.

Speaking from a script composed of slogans and platitudes, she was stilted, stagey and more than a little peculiar.

At times, her performance was like a piece of Expressionist theatre, where the words, gestures and intonation operate independently of one another.

Everything serious was delivered with grinning brio, while attempts at humour were accompanied by an expression of deep alarm.

Journalists had been told that Boris Johnson would introduce the candidate, but he didn’t appear, and Leadsom took no questions from reporters.

She left at the head of a procession of some of the most notorious ghouls of Maastricht, including Iain Duncan Smith, Bill Cash and Owen Paterson.

Outside, campaign manager Tim Loughton led supporters on a march to Westminster, chanting “What do we want? Leadsom for leader! When do we want it? Now!”

To her credit, Northern Ireland secretary Theresa Villiers looked mortified and remained tight-lipped throughout the chanting.

Leadsom has no cabinet experience, has had to backtrack on claims about her experience working in financial services, and holds unfashionable views on gay marriage (against) and fox-hunting (for).

But she could be Britain’s next prime minister within weeks.

May has the advantage of experience, as well as the backing of much of the cabinet, senior figures on both sides of the referendum debate, and much of the Conservative press.

Leadsom, however, can present herself as a true-blue Brexiteer who will ensure that there is no backsliding on key issues such as immigration in Britain’s withdrawal negotiations with the EU.

She has the support of the most hardcore Tory Eurosceptics as well as the endorsement of outgoing Ukip leader Nigel Farage and his millionaire patron, Arron Banks.

May’s supporters are confident that her experience in government will count for more among Conservative party members than her lukewarm support for the Remain campaign.

She has cultivated the grassroots assiduously for more than a year, visiting constituencies nationwide, and supporting their fundraising efforts.

Still, Leadsom has some advantages, including the fact that her hard-right positions on some issues are close to the views of many party activists.

Because she does not occupy a major office, she is free to make wild promises, as she did on Wednesday morning when she said that farmers and scientists would receive the same level of funding post-Brexit as they now do from the EU.

Above all, Leadsom’s slogan of “fresh leadership” and her very lack of experience chimes with the rebellious, iconoclastic spirit unleashed by the referendum.

For many who backed Leave, those with qualifications are tainted by association with an old order they wish to see swept away.

In any case, the grassroots Tory party membership has not valued experience in the past, choosing David Cameron over the more experienced David Davis in 2005, and Iain Duncan Smith over Ken Clarke in 2001.

In both cases, they overturned the choice of MPs.