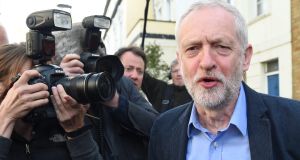 Jeremy Corbyn: Results suggest that, contrary to what his detractors say, Corbyn is not an apparent drag on the Labour vote. Photograph: Facundo Arrizabalaga/EPA

Thursday’s elections have left the Scottish National Party (SNP) in power in Edinburgh, Labour governing in Cardiff, and all but a handful of English councils controlled by the same party as before.

This apparent stability is deceiving, however, because the elections will have important and far-reaching consequences in all three countries, and for the UK as a whole.

Scotland’s election was the most dramatic, as Ruth Davidson’s Conservatives pushed Labour into third place to become the main opposition party at Holyrood. Although Nicola Sturgeon’s SNP won its third successive election victory, the party lost its overall majority.

Sturgeon will have little difficulty leading a minority government, but the setback is the first sign of frailty shown by the SNP since the Scottish independence referendum two years ago.

It could mark the beginning of a realignment of Scottish politics along left-right lines, with the SNP in the centre ground between Labour and the Conservatives. And it is likely to slow the momentum behind a second independence referendum – unless, of course, the UK votes to leave the European Union.

Much of the media and most of the Parliamentary Labour Party sought to portray the English council elections in advance as a referendum on Jeremy Corbyn’s leadership.

While his internal enemies warned that anything less than a gain of 300 seats would represent failure, pundits and pollsters predicted losses of 150-200 seats for Labour.

Labour fared better in the conservative south of the country, retaining control of councils in Exeter, Hastings, Southampton and Crawley.

Although Labour’s share of the vote was down 3 per cent compared with 2012, when the same council seats were in play, the party improved on its performance in last year’s general election and won a bigger share of the vote than the Conservatives.

Even in Scotland, where Labour had a disastrous election on Thursday, its vote share was unchanged from last year’s.

There was good news for Labour, as well, as its candidate was elected mayor of London, regaining the post from the Conservatives after eight years.

Sadiq Khan’s victory was especially sweet because it came at the end of one of the most vicious Conservative campaigns in recent years, which sought to smear Labour’s candidate, who is a Muslim, as an extremist.

The elections suggest that, contrary to what his detractors say, Corbyn is not an apparent drag on the Labour vote and his leadership does not deter the party’s supporters from turning out.

On the other hand, he has not given his party an electoral boost after last year’s general election defeat.

After six years in government, the Conservatives are in remarkably good shape, despite a succession of policy mishaps and U-turns in recent weeks, and the party’s deep divisions over Europe.

The government used the cover of the election results to announce yet another policy reversal yesterday, this time on its plans to turn all schools into academies free of local council control.

The results offer some comfort to those campaigning for Britain to remain in the EU, with little evidence of a groundswell of anger building up ahead of next month’s referendum.

The UK Independence Party (Ukip) picked up some council seats in England and won its first seats in the Welsh national assembly. But there was no breakthrough for the party comparable to the European Parliament elections in 2014, when it topped the poll. This time, Ukip was back in fourth place in England, behind the Liberal Democrats.

Thursday’s elections saw the fragmentation of the British political system, ushered in by devolution, progress a stage further. The politics of Scotland and Wales resemble those of England less and less. And even within England, devolution to the cities has thrown up fresh regional distinctions.

The leaders of all the major political parties in England, Scotland and Wales are safe for now, but each in their own way could face a bumpy time ahead.