An Irish past and a British present

For Patrick Duffy, and many others, the links between the two states are deeply personal 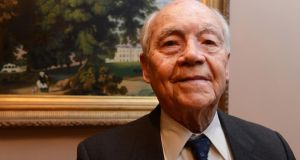 The Irish in Britain who will note with special interest the state visit of President Michael D Higgins do not all fit the stereotypical image: the ageing migrants of the 1950s and 1960s who built many of England’s homes and roads, or the more recent arrivals – the bright young generation for whom post-Celtic Tiger Ireland was a cold house.

They include people like Patrick Duffy, a sprightly 94-year-old who is filled with the physical energy and mental agility of a man 20 years his junior. Duffy is a member of the British establishment: he is Sir Patrick, a former under-secretary for defence in James Callaghan’s government and a former president of the parliamentary assembly of the North Atlantic Treaty Organisation.

His soft, north-of-England accent betrays a humble origin, and the occasional word, such as “mam” for his mother, suggests a closeness to this island rather than the larger one.

Duffy is the son of an Irish-born miner from Doncaster, the south Yorkshire city that grew rapidly during the 19th century because of huge reserves of coal and its proximity to waterways and other industrial centres such as Sheffield.

Why Duffy will note the state visit with more than passing interest is captured in the title of his memoir, Growing up Irish in Britain and British in Ireland , which he was in Dublin recently to promote.

His father, James Duffy, was born in Raith, a tiny village near Aghamore in Co Mayo. James’s father, also named Patrick, and James travelled to England as migrant agricultural workers in the late 19th and early 20th century.

“[James] came to England with his own father, when he was only 12 years of age,” Duffy explains.


Seasonal work
“They would walk right across Ireland, from Aghamore in Mayo to Drogheda, and catch a cattle boat to Liverpool. Then they’d walk up through Bury to Skipton, where they’d start their seasonal work, the haymaking, and then down to east Yorkshire to start the harvest, and then across the Humber into north Lincolnshire for the beet and the potatoes in the autumn.

“They’d return home for Christmas. But my father was soon left in Lancashire to work at the Maypole colliery outside Wigan.”

When the first World War broke out, James Duffy signed up with the Lancashire Hussars. He was in France within a month of the outbreak of the war and was dispatched to Arras, the scene of appalling Allied losses. Some 158,000 men were killed on the Allied side, and an estimated 85,000 were lost on the German side during the Battle of Arras.

James survived, however, (unlike his first cousin, Sgt Brian Dunleavy) and returned to Mayo, where he married Margaret, a girl from the other end of the village. They went to Lancashire before moving to Doncaster, where Patrick was born in 1920.


Journey to Mayo
A sense of Patrick Duffy’s Irish heritage was not part of his early years. Being raised a Catholic was, but being Irish was not until he was almost in his teens. “When I was born, mam took out an insurance policy at a penny a week with the co-op that would mature when I was 12 years of age. That was intended to finance my journey from Yorkshire to Mayo to meet my grandparents, her parents, and to meet dad’s side of the family as well,” he recalls.

“We knew there was some place called Ireland but the connection had to wait until my journey to Mayo, via stations in Sheffield and Manchester that have since disappeared, to Dublin, on a rail journey that then took me through Mullingar . . . and I met my families on both sides then for the first time. I remember even now the greeting on all sides, from everyone we met: ‘welcome home’.

“They’d never seen me before and I’d never seen them and I couldn’t understand half of them but I remember the greeting: ‘welcome home’.”

That first six-week visit had “a great emotional impact” on Duffy. Although Ireland seemed “very different, very foreign”, he still recalls the jaunting cart trip from Raith to the train at Ballyhaunis: “I cried all the way.”

Back home in Doncaster, Duffy devoured Irish music and immersed himself in the Irish side of his past. However, he says, “I was first and foremost a Brit. Dad and mam, especially dad, were always conscious of their obligation to Britain and felt therefore that their first duty lay with Britain and never encouraged our Irishness. [But] they never discouraged it.”

Like his father in the first World War, Duffy volunteered when the second World War broke out and served with the royal navy.

A visit to Belfast brought him face to face with the sectarian nature of that part of the UK, certain parts of the city being off-limits for no obvious reason.

“It was a revelation before it was disturbing, because mam and dad never spoke about the North of Ireland,” he says.

He later learned about employment policies that discriminated against Catholics and how gerrymandering contributed to unionist domination of politics.

His own interest in politics was developed as a student at the London School of Economics. He joined the Labour Party and eventually secured a safe seat, first in Colne Valley, and then, from 1970 to 1992, in Sheffield Attercliffe.

Duffy’s memoir describes the dark days for the Irish in Britain during the IRA terror campaigns, the hunger strikes and the peace process.

Duffy, who believes Nato should stay well away from Ukraine, was president of the organisation’s parliamentary assembly during the period of profound changes in East-West relations and eastern Europe in the late 1980s and 1990s, and was knighted for his role.

Having spoken with enthusiasm about a long political life, lived with passion, he is then off to meet Taoiseach Enda Kenny. He is also looking forward to spending some time in his second home in the west, not a million miles away from where his parents were born.

Duffy is comfortable being Irish and British, at ease in both countries. Over the coming days, he will watch as President Higgins and the queen reaffirm links between their two countries that, for him, are deeply personal.