France will ‘remain engaged for as long as it takes’ against Islamist threat, Macron says 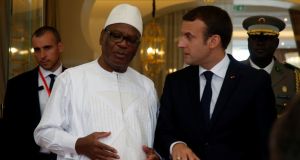 African powers launched a new multinational military force to tackle Islamist militants in the Sahel on Sunday, which French president Emmanuel Macron told a regional summit should be fully operational by the autumn despite its current budget shortfall.

Some observers see the initiative of the G5 Sahel bloc – Mali, Mauritania, Burkina Faso, Niger and Chad – as forming the basis of an eventual exit strategy for about 4,000 French troops now deployed to the volatile region. But Macron said Paris had no plans to withdraw them.

Islamist militant groups, some with links to al-Qaeda, seized control of Mali’s desert north in 2012.

Although they were driven back a year later by a French-led military intervention, they continue to carry out attacks against UN peacekeepers, Malian soldiers and civilian targets in violence that has spilled across Mali’s borders.

“Every day we must combat terrorists, thugs, murderers, whose names and faces we must forget, but whom we must steadfastly and with determination eradicate together,” Macron said at the summit in Mali’s capital, Bamako.

During the meeting, leaders of the G5 Sahel countries formally established the new force, which will operate in co-ordination with French troops and Minusma, Mali’s struggling UN peacekeeping mission.

The countries of the G5 Sahel bloc began floating the idea of a regional force as early as 2015, but since taking office in May, Macron has thrown Paris’s weight behind the plan, including through a UN resolution last month.

“There is urgency because those we’re confronting are not going to wait,” said Mali’s president, Ibrahim Boubacar Keita. “It’s also clear that France alone must not continue to bear the burden of this fight against terrorism.”

On Sunday Macron said the force, which is expected to comprise about 5,000 troops, needed to be fully operational by this autumn.

But he played down speculation that he was seeking to reduce the burden on France’s cross-border Operation Barkhane, saying in a meeting with Mali’s French community following the summit that Paris would “remain engaged for as long as it takes”.

With its military headquarters in the northern Mali town of Sevare, the G5 Sahel force will focus on border zones – one along the frontier between Niger and Mali, another between Mali and Mauritania, and a third straddling the borders between Burkina Faso, Niger and Mali.

Paris considers the Sahel a breeding ground for militants and traffickers who pose a threat to Europe.

Among them was French citizen Sophie Pétronin, whose kidnappers, Macron said, France would “put all our energy towards eradicating”.

While Sunday’s summit marked a step forward in the plan to set up the new force, it still faces a number of obstacles.

The European Union has pledged around €50 million ($57 million), and Macron said France would contribute around €8 million by the end of the year.

Each of the G5 Sahel members will contribute €10 million to the force. But President Keita on Sunday estimated the required total budget at €423 million.

The G5 Sahel nations – among the world’s poorest – are already overstretched.

President Idriss Déby of Chad, which possesses the region’s most capable military, has voiced reluctance to further commit his forces unless they receive more international support.