Tributes paid to Irish schoolgirl who drowned in Crete 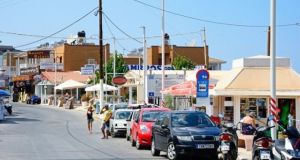 Laura Dempsey died while on holiday with her family the village of Stalida, Crete. Photograph: iStock

The Irish schoolgirl who died while on holiday in Crete has been remembered as a “popular” and “bright” student who had just completed her Junior Certificate exams.

Laura Dempsey (15), from Greystones, Co Wicklow, died in a hotel pool on the Greek island earlier this week while on holiday with her parents.

She has been remembered by friends and extended family as a “fun-loving and sporty” teenager who loved to sail.

The teenager had been holidaying with her parents John Dempsey and Nicola (Nicky) Smith to celebrate the end of her exams when the tragedy occurred.

A spokeswoman for Temple Carrig Secondary School told The Irish Times that Laura would be remembered as a “model student”.

“Along with the whole Greystones community, we were shocked and devastated to hear of the sudden passing of one of our students, Laura Dempsey,” said the spokeswoman.

“Laura had just completed her Junior Certificate exams and was a model student - bright, full of fun and involved in many school activities. She was extremely popular in the School and will be greatly missed by many because she was such a good, kind and loyal friend.

“Our love, condolences, thoughts and prayers are with her family and friends at this awfully sad time.”

Church of Ireland Archbishop of Dublin Michael Jackson expressed his condolences at the death of the teenager.

“It was with deep sadness that I heard of the death of Laura Dempsey at the weekend. To her family, we extend our sincere sympathies and pray that they know God’s strength in their heartache and devastating loss.

“Laura was a third year student in Temple Carrig School, Greystones, of which I am patron, and had just completed her Junior Certificate exams.

“We hold Laura’s friends and the whole school community in our thoughts and hearts as they struggle to come to terms with their loss. We also pray for the principal, teachers, chaplain and staff of the school as they support the students in their grief,” said the Archbishop.

According to Cretapost.gr, the young girl’s parents became concerned on Sunday evening when they could not locate her and discovered her unconscious in the swimming pool at their hotel.

Laura’s body was removed to a local hospital where a postmortem was scheduled to take place on Monday.

Cathaoirleach of Greystones Municipal District, Jennifer Whitmore, told The Irish Times there was a “deep sadness” in the area following Laura’s death.

“It’s a very sad tragedy to hit the area. Everyone is in deep shock following the news. It’s so sad to think a family holiday turned into such tragedy. Our deepest condolences go to the young girls family at this time,” said Ms Whitmore.

News of the tragedy was met with shock and sadness in Greystones, where the family are popular members of the local sailing club.

The club’s commodore, Daragh Cafferky, said the family and friends and fellow club members were “devastated”.

“Laura was a junior member of our sailing club and she was a much loved member. Her parents are also involved in the club and it’s a harrowing tragedy to happen on a family holiday,” he said.

“Laura had a very central role in our club and the loss of a child is deeply traumatic...As a family they are a very pro-active family when it came to sports, in particular water sports, so out deepest condolences are with Nicki and John and the extended family at this dreadful time.”

A spokeswoman for the Department of Foreign Affairs said it is aware of the case and is providing consular assistance for the family.