Tighter border security means more migrants die while trying to enter US, according to Amnesty

Large number of unidentified bodies found in Arizona over past decade 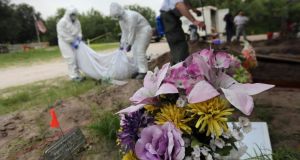 A forensic anthropology team unearths the remains of unidentified immigrants from a cemetery in Falfurrias, Texas. Teams from Baylor University and the University of Indianapolis are exhuming the bodies of more than 50 immigrants who died, mostly from heat exhaustion, while crossing illegally from Mexico into the United States. Photograph: John Moore/Getty Images

The remains of 45 suspected migrants from Mexico and beyond rest in body bags and zippered pouches in Bruce Anderson’s office at Pima County Medical Examiner’s Office in Arizona.

Anderson, a forensic anthropologist, has paper records for several hundred more people whose remains were found over the past 12 years in the deserts of the American state bordering Mexico.

Of about 2,100 remains found over that period in 10 counties falling under the Pima County’s office, it has identified about 1,300 people; the identities of 791 people remain unknown.

Four counties within Pima County’s areas have the highest recorded number of migrant deaths over recent years of any area along the 1,969-mile border separating the United States and Mexico.

The bulk of those identified, around 85 per cent, came from Mexico; the rest were from Guatemala and El Salvador and as far away as the Dominican Republic, Jamaica and Brazil.

“It is an absurd number. It is an obscene number and it has been growing over recent years,” he said.

Anderson said tighter border controls in neighbouring California and Texas have created a “funnel effect” in Arizona, forcing migrants through the state’s more treacherous deserts where loose perimeters, particularly in the Tohono Native American reservation, lure migrants and their smugglers.

Migrants risk temperatures of more than 40 degrees to walk up to 50 miles over several days to be picked up by smugglers further north and ultimately to find blue-collar work in the US.

Migrants die of exposure or dehydration in the deserts or, further east along the border, drown in the rivers as they trek into precarious terrain to avoid security checkpoints along the border.

The deaths are among the examples “of the most heinous abnegation of the responsibility to promote human rights, including the right to life”, says the human rights organisation.

Salil Shetty, secretary general of Amnesty, says in its 2013 annual report that the deaths are “a direct result of measures taken by the US government to make safer passages impassable for migrants.

“The numbers have remained steady even as immigration is declining,” he said.

There were 463 deaths, the equivalent of five migrants dying every four days, in the year to September 2012. Only 2005 was a worse year for migrant deaths when 492 fatalities were recorded.

An alarming difference between the statistics for the two years is that there were more than three times the number of migrants caught crossing the border in 2005 than in 2012.

This suggests that stronger border security is making border crossings more treacherous as a greater percentage of the migrant population trying to enter the US are dying.

“Increased immigration enforcement along certain stretches of the US-Mexico border continued to push irregular migrants to use particularly dangerous routes through the US desert, resulting in hundreds of deaths,” Amnesty says in the report.


Crime victims
Amnesty noted that irregular migrants were also victims of crime, such as human trafficking and domestic violence. Border Patrol says sexual assaults against immigrants by smugglers have increased.

Pressure to tighten US border controls even further – a Republican-demanded precondition for an overhaul of the immigration laws presently going through the US Senate – will only make the routes along America’s southern border even more impassable and hazardous for migrants from the South.