The Central African Republic, where Emperor Bokassa ruled with violence and greed 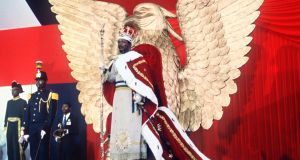 Jean-Bedel Bokassa, the self-proclaimed emperor of the Central African empire, after crowning himself in 1977. Photograph: Pierre Guillaud/AFP/Getty Images

He was the Nero of equatorial Africa, the ogre of Berengo. Jean-Bedel Bokassa has been dead for 18 years, but even as the Central African Republic (CAR) lurches through the worst violence of its history, the late dictator remains the paradigm of excess and cruelty in this absurd and tragic country.

Bokassa’s rebellious father was killed by French colonial authorities when Jean-Bedel was six-years-old. His mother committed suicide a week later, leaving behind 12 children. At age 18, Bokassa joined the French army. He participated in the Allied landing in Provence, fought in Indochina and Algeria, for which he was decorated, commissioned and given French nationality.

With French help, Bokassa overthrew his first cousin and declared himself president of CAR in 1966. He stepped up uranium and gold mining, built Bangui’s Mpoko airport, the national assembly, sports stadium, a high-rise hotel, university and hospital. International investors flocked to the country.

At the same time, Bokassa revealed his savage streak, torturing and murdering dozens of acolytes whose loyalty he questioned, deciding whether they should be fed to lions or crocodiles, eliminating their families least they seek revenge.

Bokassa established personal monopolies over Central Africa’s production of diamonds, ivory and coffee, and treated government coffers as his own. Chinese funds for a university, for example, bought one of his four châteaux in France.

In 1972, Bokassa declared himself president for life. In 1974 he promoted himself to marshal. None of this impeded Bokassa’s friendship with Valéry Giscard d’Estaing, France’s finance minister in the early 1970s, then president of France from 1974 until 1981. Giscard visited Bokassa each time he travelled to CAR to indulge his passion for big game hunting.


Crowned himself
On December 4th, 1977, Bokassa crowned himself emperor before 5,000 people in Bangui’s sports stadium. He crowned Catherine Denguiade, the third of his 17 official wives, whom he had kidnapped when she was a 14-year-old schoolgirl, empress. Less than two years after the coronation, Catherine decamped to Geneva with the couple’s seven children. One by one, she sold the diamonds in her crown to support them.

The Élysée sent eight horses from Normandy to pull Bokassa’s bronze and gold coronation carriage. Two horses died, and the emperor and empress had to complete the procession in a limousine. In the tropical heat, Bokassa wore a replica of Napoleon’s scarlet cape, lined with white ermine. From Paris he imported a gold-plated eagle throne, gold crown, 60,000 bottles of champagne and burgundy, a Cardin wardrobe for himself, Lanvin for Catherine. The coronation cost the equivalent of all French development aid for that year.

In early 1979, Bokassa was accused of taking part in two massacres of school children who protested against him. He’d become an embarrassment to France. While Bokassa was on a visit to his new mentor, Muammar Gadafy, in September 1979, Giscard sent French paratroopers in to depose him.

After seven years in exile, Bokassa chose to return to stand trial in Bangui. Earlier convictions for cannibalism and the school massacres were dropped on grounds of insufficient evidence. His convictions for murder, conspiracy to murder, corruption and consorting with a foreign power – Libya – were upheld.

President André Kolingba – who’d been Bokassa’s ambassador to Canada and Germany – pardoned him in 1993. Bokassa walked out of prison bare footed, wearing a white robe. “I am the thirteenth apostle,” he announced. He died of a heart attack in Bangui three years later. In 2010, the now deposed President Francois Bozizé – who’d been Bokassa’s aide-de-camp – declared Bokassa’s “complete rehabilitation”. These days, it’s not uncommon to hear Central Africans pine for Bokassa, “a strong man who made CAR count on the world stage”.


Bronze statue
Sosthène Bokassa, one of 54 children recognised by the dictator, accompanied me to Bokassa’s former country estate at Berengo, 65km from Bangui. A 3½-metre bronze statue of Bokassa dominates the outer courtyard. Bokassa’s tomb is a shabby affair, covered in bathroom tiles and sheltered by six concrete pillars supporting a corrugated steel roof.

Bokassa’s symbol, an eagle superimposed on the sun, hangs over the gateway. The boat-shaped villa that was reserved for Giscard stands to the left. “They called each other ‘relative’. Giscard came several times a year, in secret,” Sosthène recalls. Bokassa avenged Giscard’s betrayal by revealing that Giscard accepted his gifts of diamonds, scuppering the French president’s hopes for re-election.

Sosthène points out the ruins of Empress Catherine’s pavillion, Bokassa’s chalet, the swimming pool. “We were all in school in France and Switzerland,” Sosthène recalls. “He brought us here for the holidays, without our mothers. It hurts to see Barengo in this condition, when one knew it in its glory…” Some of Berengo’s residents, 850 former Seleka militiamen aged between 18 and 29, follow us through the ruins. As Christians who served in a Muslim militia, they have no place in today’s polarised CAR.

“President Michel Djotodia [the Muslim Seleka leader turned president, overthrown in January 2014] said this would be a military academy. He visited us twice, with his chief of staff,” says Amoran Selguetia, who calls himself secretary general of the non-existent academy.

Selguetia and his men were peasants who joined up as the Seleka rebellion swept from the northeast down towards Bangui in early 2013. The militia’s reputation for murder, rape and looting still inspire terror. Did they participate in these excesses? I ask Selguetia.

A quiet, thoughtful man, Selguetia evades my question. “If we had wanted to do these things, we would have stayed in Bangui,” he says. “Michel Djotodia told us: ‘You are going to military training. From today, you are members of the armed forces of the CAR. You are no longer Seleka’.”


‘Disciplined’
The Muslim cadets at Berengo left long ago, taking their weapons. The last instructor,departed in November. “We are better than the militia. We are disciplined, trained soldiers,” Selguetia boasts, recounting their daily routine: “Half an hour of calisthenics in the courtyard. At 9.30, I assign them chores. Some look for rats and mice and snakes to fill our stomachs.”

The regional commander of the anti-balaka, known as Rambo, wants the former Seleka militiamen at Berengo to leave, although they are Christians like him. “You are the ones who sold the country to the Muslims,” Rambo told them this week.

But Selguetia and his men will wait as long as it takes to reach the promised land of incorporation in the CAR army.

Could I deliver a letter to the minister of defence? Selguetia asks as I’m leaving. He lets me read the painstakingly hand-written letter with CAR’s “Unity, Dignity, Work” motto.