Emergency anti-terrorist and organised crime legislation renewed for another year 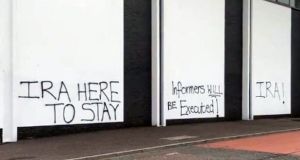 Emergency anti-terrorist and organised crime legislation has been renewed for another year after it was accepted in the Dáil by 63 votes to 21 and passed without a vote by the Seanad.

Minister for Justice Charlie Flanagan told the Oireachtas the 1998 Offences against the State (Amendment) Act is a “robust and proportionate response to those who choose the bullet over the ballot box”.

The legislation was implemented following the Omagh bombing in August 1998 when 29 people were killed. It provides for the non-jury Special Criminal Court which he described as necessary because of the “threat posed to the criminal justice process by individuals, terrorist groups and organised criminal groups that seek to subvert the system through the intimidation of witnesses”.

The Minister for Justice is required to provide an annual report every year and seek Dáil and Seanad approval for renewal of the measures.

He said the Garda assessment is that the threat level in Northern Ireland from republican paramilitary groups is “severe” and the groups remain “wedded to brutality and criminality”.

The Minister added that they “remain very active here carrying out fundraising and planning and preparatory activities to support attacks in Northern Ireland”.

He cited a number of incidents including the posting of incendiary devices to addresses in the UK in March, the “continuing attempts to murder and maim police officers” including the planting of a bomb under a PSNI officer’s car last month, and the “callous and appalling murder of Lyra McKee in Derry in April, an innocent woman contributing much to society”.

The non-jury trial is also applicable in the Criminal Justice (Amendment) Act of 2009 which deals with organised crime. Mr Flanagan said organised crime continued to present a “significant problem” and pointed to the “litany of murders” including three in Dublin in the space of a week.

In the Seanad, Fianna Fáil Senator Lorraine Clifford-Lee said her party supported renewal of the provisions for which there was a clear need. She said the murder of Ms McKee in Derry “shocked everyone and showed how close we are to violence breaking out again”.

Sinn Féin Senator Niall O Donnghaile said his party had last year called for a comprehensive review of the emergency legislation before its renewal this year but this had not happened.

But he said “we must ensure the emergency legislation is fit for the 21st century rather than an outdated 20th century piece of work”.

Labour Seanad leader Ivana Bacik said her party would not press a vote and she acknowledged the ongoing threat of dissident republican activity and or organised crime.

But she said there was a pattern of non-usage of provisions in the legislation over a number of years and “we need to inquire whether it is necessary every year to renew those specific provisions”.

In the Dáil Labour TD Joe Sherlock proposed amendments relating to the report the Minister is required to provide to the House every year. Ms Bacik said the report gives the number of times a particular offence is prosecuted and the arrests made but it did not give any detail on “the adequacy of the ordinary courts to administer justice and why the Government is saying the ordinary courts are inadequate to administer justice”.