Man arrested in Germany on suspicion of planning ricin attack 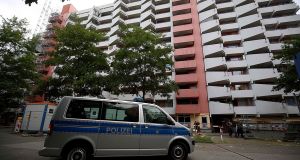 A police car stands in front of an apartment building in Cologne, Germany, where a man suspected of trying to build a biological weapon was arrested. Photograph: dpa/Oliver Berg/Germany/AFP/Getty Images

A Tunisian man was arrested in Germany on Wednesday on suspicion of planning an Islamist-motivated attack using the deadly toxin ricin.

The GBA federal prosecutor’s office said in a statement on Thursday that 29-year-old Sief Allah H had been detained in the western city of Cologne on June 13th after a search of his apartment.

It said the suspect had bought 1,000 grains of ricin, a naturally occurring poison found in castor beans, and an electric coffee grinder online.

The prosecutors said they still had not determined how far along the suspect was in the planning of an attack, but said he was planning an assault in Germany.

“There is strong suspicion that he had deliberately produced chemical weapons,” they said. “In addition, he faces the initial suspicion of preparing a serious act of violent subversion against the state.”

There is no evidence so far that the suspect is a member of a “terrorist organisation”, they added. Prosecutors were also not aware if he had set a date and target for a possible attack.

The Bild newspaper reported that the suspect lived in the Chorweiler neighbourhood of Cologne with his wife and four children. He supposedly used instructions for the making of a ricin bomb that had been posted online by the extremist Islamic State group. – Reuters and AP