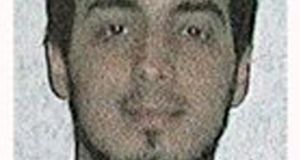 Security sources told local media that Laachraoui, a 25-year-old Belgian, was one of Tuesday’s airport bombers, identifying him as one of the three men in the CCTV image released by police.

“He never failed a class,” Ms Pellegrini said of Laachraoui, who studied at the school for six years, before graduating in 2009.

“We haven’t heard from him since,” she told reporters in a phone interview.

He left Brussels for Syria in February 2013.

Travelling under the false name Soufiane Kayal, he was documented driving from Hungary into Austria in September in a car driven by Salah Abdeslam, the prime suspect in the Paris attacks, who was arrested in Brussels last week.

There is speculation Laachraoui had just returned from Syria, possibly by sea with refugees.

Catholic religion classes are part of the school’s curricula for all students independent of their religion, and Laachraoui would have attended those classes, Ms Pellegrini said.

While the school offers technical studies in fields such as chemistry, Ms Pellegrini said he only pursued general studies while at the school.

It is not uncommon for Muslim pupils in Belgium to go to Catholic schools, which can be seen as more conservative or more exclusive than state schools.

The Paris attacks suspected mastermind, Abdelhamid Abaaoud, a Belgian killed during a raid in Paris suburb St Denis on November 18th, had at 12 won a scholarship to an elite Catholic school.