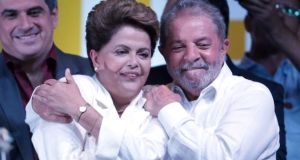 After her narrow victory in Sunday’s election, Brazil’s President Dilma Rousseff has targeted political reform as a top priority during her second term.

Speaking to supporters shortly after she won 51.6 per cent of the vote to defeat her centre-right opponent, Aécio Neves, by just three points in what was the closest election since the return of full democracy in 1989, the president said she understood the country needed “major changes”.

Her re-election means an unprecedented fourth consecutive term for the Workers’ Party, but it was secured by the smallest margin since it first won power in 2002 amid a recession and a major corruption scandal in the state-controlled oil giant Petrobras.

Ms Rousseff owed her victory to massive majorities in Brazil’s poorer north and northeastern states, where government social programmes have the most impact, as well as a crucial victory in Mr Neves’s home state of Minas Gerais, Brazil’s second most populous.

Her voice strained by weeks of campaigning in what was a bitter and nasty race, she told ecstatic party militants in Brasília that among the reforms she would seek, “the first and most important must be political reform”. She said she would work with congress to organise a referendum to implement necessary changes.

Ms Roussef had briefly proposed a referendum on reform last year in response to massive street demonstrations but quickly dropped the idea in the face of resistance from congress. A renewed effort to reform Brazil’s chaotic and venal political system will largely depend on her ability to swing her fractious and frequently rebellious coalition behind the idea.

That could be made more difficult by the developing corruption scandal in Petrobras that has left dozens of senators and deputies from her coalition facing accusations that they siphoned millions from the country’s biggest company. With federal police and public prosecutors in possession of documentation about the scheme after two of its key operators started co-operating with investigators in return for reduced sentences, the scandal will dominate the agenda of the new congress.

Still the country’s most popular politician following his successful two terms as president, Mr Lula campaigned tirelessly for his successor but has reportedly pushed her to try to improve relations with the country’s business sector. n In neighbouring Uruguay, the ruling left-wing Broad Front coalition failed to win an outright majority in Sunday’s presidential election in its quest for a third straight term in power.

Former president Tabaré Vázquez topped the poll with 46 per cent of the vote and will face the conservative National Party candidate Luis Lacalle Pou, who came second with 31 per cent, in a run-off round on November 30th.

Despite trailing by 15 points, Mr Lacalle Pou’s bid was immediately boosted by the endorsement of the third-placed candidate, Pedro Bordaberrry of the populist Colorado Party, who took 13 per cent, setting the stage for the tightest race since the return of democracy in 1984.