Rousseff in emergency talks over protests 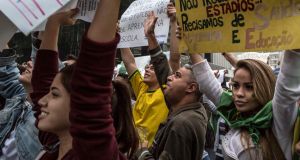 Brazilian president Dilma Rousseff held an emergency meeting with ministers yesterday to discuss how to respond to the protests that have rocked South America’s biggest country and are threatening to turn into a popular revolt against its political class.

In the biggest show of discontent yet more than a million people took to the streets of over 100 cities and large towns across Brazil on Thursday night demanding an end to corruption and improvements in dilapidated public services.

In the capital Brasília soldiers were deployed to protect the presidential palace and national congress during a march by an estimated 15,000 people. Frustrated in their efforts to reach the two buildings, protesters instead invaded the country’s foreign ministry, breaking windows and setting fire to its entrance.

The night’s biggest demonstration was in Rio de Janeiro where more than 300,000 people thronged the city centre. Some protesters clashed with riot police who responded with volleys of tear gas that quickly dispersed crowds amidst accusations of heavy-handedness.

There were violent incidents in several other state capitals and smaller cities around the country though it was not immediately clear if the trouble was provoked by a hard core of radicals, troublemakers or in response to aggressive policing.

In the city of Riberão Preto one person was killed when a Land Rover drove into a march after an argument between its driver and demonstrators. Student Marcos Delefrate is the first person to die since the protests started two weeks ago.

Forced out
An attempt by militants of Ms Rousseff’s Workers Party to join the demonstration in São Paulo failed when a small group of party activists was forced from the city’s main avenue where more than 100,000 people had rallied.

Demonstrators also attacked members of several small hard-left groups who attempted to join the rally with their party banners. They were confronted by masked protesters who grabbed and burned several of their flags while others chanted “no parties” and labelled the leftists “opportunists” for seeking to participate.

Forced to retreat, the militants denounced what they said was censorship. “We have been in the streets protesting for years when many of the people here today were still sitting at home,” said Fátima Sandalhel of Consulta Popular, one of the groups attacked.

The radical collective Free Pass Movement, whose marches against an increase in bus fares helped spark the protests, said it was suspending its participation. A member of the group condemned the attacks against the left-wing groups saying “right-wing elements whose agendas we totally disagree with are taking advantage of the protests”.

Earlier in the week authorities ceded to Free Pass Movement’s demands and rescinded the fare hikes in a bid to quell public anger. But Thursday’s demonstrations made clear that the climb-down had emboldened protesters who are now targeting endemic corruption among politicians.

‘Message’
“The political class is fearful. It understands it is being sent a message,” said André Pereira César, a political analyst in Brasília. “But what makes it even more fearful is that this movement has no leadership with whom it can negotiate, or a specific list of demands that it can address.”

After yesterday’s meeting it was not immediately clear if President Rousseff would publicly address the protests.

Meanwhile, Fifa, the world football governing body, was forced into denying it was planning to abandon the Confederations Cup under way in the country.

Brazilian media reported that Fifa had warned the government that if the security of organisers and participating squads could not be guaranteed, it would halt the competition, which is a dress rehearsal for next year’s World Cup.

Attacked
In the city of Salvador two vans being used by Fifa were attacked and protesters attempted to invade a hotel where members of Fifa’s delegation are staying.

Marchers have displayed increasing anger at the amount of public money being spent on preparations for next year’s football World Cup.

In São Paulo on Thursday demonstrators chanted “Screw the Cup, we want education, health and jobs”, while in Rio de Janeiro there were cries of “There’ll be no Cup”.

More demonstrations were being organised online across the country for last night and today. “We will continue until politicians start to respect our rights and treat us with dignity,” said Tiago Abrantes during Thursday night’s march in São Paulo. “This country has so many problems and we have been silent for too long.”