America Letter: Washington museum will tackle sensitive issues of the past and present 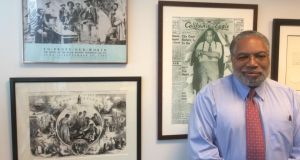 Lonnie Bunch, director of the Smithsonian’s National Museum of African American History and Culture, which is scheduled to open in September 2016. Photograph: Simon Carswell 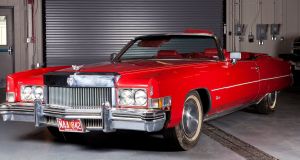 When the White House said, following the latest mass shooting in the United States, that president Barack Obama believed the Confederate flag “belongs in a museum”, it may have had this place in mind.

“I very much would have liked to have had that flag,” said Lonnie Bunch, director of the National Museum of African American History and Culture, which will be the newest of the Smithsonian Institution’s museums in Washington when it opens in September 2016.

South Carolina governor Nikki Haley passed legislation last month taking down the Southern flag, a symbol of slavery and hate to many Americans, from the state house grounds in Columbia. The move came after Dylann Roof, the man accused of killing nine black people at a historic African-American church in Charleston, was shown in photographs holding the flag along with his white supremacist messages.

“I knew it was going to the South Carolina state’s museum,” said Bunch. “But I think that it would have been really appropriate to have that flag here, because this is a museum that is not about race, it is about America’s identity, so therefore that flag would allow us to talk about the conflicting notions of what American identity is.”

For Bunch, it’s quite a weight to carry but more than three decades of experience as a historian and a curator has left him well-prepared for the inevitable criticism coming his way. “You cannot build this museum if you are not comfortable with controversy and criticism,” he said. “You can’t explore race, you can’t look at the history of racial violence whether it is Eric Gardner or Emmett Till, without recognising that people are going to be upset and angry about it.”

Bunch travelled the world to see how museums explored national identity and difficult moments in their history. One place that shaped this thinking was Northern Ireland, where he felt museums have avoided The Troubles. “They didn’t really know how they wanted to talk about that in a contemporary mindset.”

His curators have been dispatched to gather the raw materials to tell very recent and still raw histories – the shooting of black teenagers Trayvon Martin in Florida and Michael Brown in Ferguson and the rioting in Baltimore. “I am not really collecting to simply lock it away for 15 or 20 years. Some of the museum has to reflect as current a consideration as we can, and some of these moments allow us to do just that.”

Although first conceived in 1913, it wasn’t until 2003 that the US Congress passed legislation to build the museum, committing half the $510 million cost of construction and exhibits.

Bunch wants visitors to see the slave shackles made for children, the amulet the Lobi tribe of West Africa created to protect their people from slave traders and the Bible belonging to Nat Turner, the slave who led a rebellion in Virginia in 1831 so people could see he could read. “I have always said that there is not a story that we cannot tell in this museum, no matter how painful,” he said.

While it will be a fount of education and entertainment, the museum might also attract adverse attention being such a national symbol. “We are considered the Smithsonian museum most at risk for domestic terrorism,” said Bunch, leading him to look at everything from the strength of the museum’s walls to how to engage with the public safely.

He has a special drawer for the racist comments and “crazy things I get”, and he escalates any threats up to the US department of justice.

The beautiful bronze sculpted building being constructed will be the closest of the Smithsonians to the White House, fitting for a museum erected during the era of the first African-American US president.

It is also fitting that it should stand on the National Mall which he describes as “America’s front yard”. He wanted to create an iconic building to represent the often overlooked “dark presence” in the US that would be in any future photograph of the mall from the Lincoln Memorial to the US Capitol.

“I have argued that African-Americans have always been part of the marrow of the United States,” he said, “so it is appropriate that this building stand in a place that says, ‘I, too, am America.’ ”