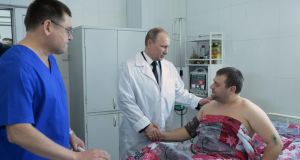 Russian president Vladimir Putin has made a pre-dawn visit to the city reeling from two suicide bombings this week, bringing gestures of sympathy for the victims and questions for the officials he has ordered to beef up security.

The bombings at the main railway station of Volgograd and on a city trolleybus killed 34 people and wounded scores more, 65 of whom are still in hospital.

No claim of responsibility has been made for either attack, but they come a few months after the leader of an Islamic insurgency in Russia’s south called for attacks in the run-up to February’s Winter Olympics in the resort city of Sochi.

“Whatever motivated the criminals’ actions, there’s no justification for committing crimes against civilians, especially against women and children,” Mr Putin said, opening a meeting in Volgograd with the heads of the Federal Security Service and the Interior Ministry.

He said he would ask the two officials in the closed-door session for details on what measures their agencies are taking to raise security in the country.

Afterwards, Mr Putin placed a bouquet on the pile of flowers, balloons and other commemorative items that has risen at the site of the trolleybus bombing, and then visited a hospital where some of the wounded are being treated.

Television footage showed him meeting with an unidentified female victim who told him from her bed that “Volgograd people have a strong spirit and just can’t be broken”.

Volgograd, a city of about 1 million, has been under heavy security since the Sunday and Monday attacks. Police reinforcements and paramilitary troops were sent into the city.

As part of the tightened security, police and sniffer dogs have checked some 2,700 residential buildings, along with bus stations, parking lots and other structures, the city’s police department said, according to the ITAR-Tass news agency.

In the course of the inspections, police seized about 25lbs of drugs and seized more than 100 illegal firearms, according to the report. However there have been no reports of any arrests connected to the bombings.

Olympic organisers have introduced some of the most extensive identity checks and other security measures ever seen at an international sporting event. But even if security at the games is tight, the Volgograd bombings show how public transit in Sochi and sites away from the sports venues are vulnerable.

Suicide bombings have rocked Russia for years, but the insurgents seeking to create an Islamic state have largely confined their attacks to the North Caucasus region in recent years. The blasts in Volgograd signaled that militants want to show their reach outside their native region.