President of France honours men who overpowered gunman on train

Moroccan denies jihadist motives despite being listed as radical Islamist 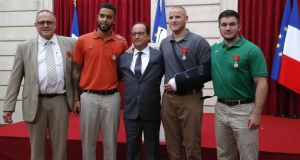 President François Hollande on Monday awarded France’s highest distinction, the Legion of Honour, to three Americans and a Briton who overpowered a gunman on the Thalys high-speed train between Amsterdam and Paris on August 21st.

The first man to jump Ayoub El-Khazzani, the Moroccan who fired at least three shots in the train, was Spencer Stone, an off-duty US air force serviceman. Mr Stone’s wounded arm was in plaster and a sling during the ceremony at the Élysée Palace. El Khazzani nearly severed Stone’s thumb with a box-cutter.

The four heroes seemed to physically dwarf the French president, who pinned the red-ribboned medals on their open-neck shirts. Chris Norman, the British IT expert who helped the three friends from California overwhelm the gunman, was the only one to wear a jacket and tie.

Four more men are to receive the Legion of Honour. The Frenchman who encountered El-Khazzani as the gunman exited the train toilet and alerted passengers does not wish to be identified. Mark Moogalian, a Franco-American English teacher who was shot in the neck while trying to stop El Khazzani is still hospitalised. Mr Hollande said Mr Stone saved Mr Moogalian’s life by administering first aid, despite his own wounds. Two employees of the SNCF railway company will also be decorated.

It was Alek Skarlatos, 22, a US National Guardsman, who uttered the now famous words “Let’s go,” to Stone and Anthony Sadler, a student at Sacramento State University. They were “worthy of a frontline officer,” Le Monde newspaper said in praise of the Americans’ rejection of “inaction” and “passivity”. Mr Sadler earlier said that “hiding or staying seated doesn’t accomplish anything. In a terrorist attack, please do something.”

“Since Friday, the entire world admires your courage, sang-froid and spirit of responsibility,” Mr Hollande told the Americans and Briton. The train contained more than 500 passengers, and El-Khazzani was armed with a Kalashnikov, a Luger pistol and 300 bullets. “He had enough weapons to carry out a massacre, and that’s what he would have done if you hadn’t risked your lives to stop him,” Mr Hollande said.

The gunman is being held at the French anti-terrorism unit at Levallois-Perret, a suburb of Paris. He claims he found the weapons in a suitcase in a park in Brussels, and had the idea of robbing a train, stagecoach style. His lawyer, Sophie David, describes him as “emaciated, hungry, uneducated and lost.”

Sid Ahmed Ghlam and Yassin Salhi, North African immigrants who were arrested in France in April and June after what appeared to be jihadist murders, also denied Islamist motives, possibly because terror suspects are dealt with more severely under French law.

Ayoub El-Khazzani was born in Tetouan, Morocco, in 1989. He joined his family in Madrid at the age of 18, and remained in Spain until 2014. Spanish authorities arrested him three times for selling hashish. He frequented a radical mosque in Algesiras, near the Straits of Gilbralter, where he and his family moved in 2013.

El-Khazzani told police he is homeless, lives in Brussels and with his Spanish residence card spent the last six months travelling around Europe by train. He was listed as a radical Islamist by the intelligence services of Spain, France, Germany and Belgium.

On May 10th, he flew from Berlin to Istanbul, a frequent transit point for would-be jihadists seeking to join Islamic State in Syria. Investigators are trying to determine whether El-Khazzani visited Syria, and if he had accomplices.

El Khazzani had two mobile phones with him, one of which was activated on the day of the attack. He was an avid user of social networks. A week after the January 2015 Charlie Hebdo massacre, he posted photographs of the 1954-1962 Algerian war, described France as “a criminal state and a terrorist civilisation”, and said that “Jews and Christians started terrorism.”

The attack has prompted a debate about security on trains, with the transport minister demanding spot checks on baggage. But to provide security comparable to that in airports, officials say passengers would have to arrive an hour early and ticket prices would increase substantially. More than 700,000 passengers go through the Gare du Nord daily, compared to 175,000 at Roissy-Charles-de-Gaulle and 80,000 at Orly.