Pope Francis: Gay people should not be accepted into ministry

‘In consecrated and priestly life, there’s no room for that kind of affection’ 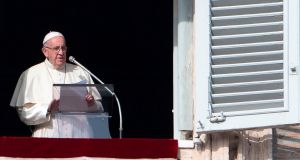 Pope Francis said it seems as if homosexuality was fashionable. Photograph: Getty Images

Pope Francis is “concerned” about what he describes as the “serious issue” of homosexuality, saying in an interview published on Saturday that being gay is a “fashion” to which the clergy is susceptible.

“The issue of homosexuality is a very serious issue that must be adequately discerned from the beginning with the candidates,” the pontiff said with regards to would-be priests.

“In our societies it even seems that homosexuality is fashionable and that mentality, in some way, also influences the life of the church,” he says in the book The Strength of a Vocation, released in Italy on Saturday.

“This is something I am concerned about, because perhaps at one time it did not receive much attention,” he says in the book, a transcript of an interview that will be released in 10 languages.

The Catholic church’s position is that homosexual acts are sinful. The pontiff’s stance on homosexuality in the clergy is not new.

A decree on training for Roman Catholic priests in 2016 stressed the obligation of sexual abstinence, as well as barring gay men and those who support “gay culture” from holy orders.

The barring of people who present homosexual tendencies was first stipulated by the Catholic church in 2005.

“It can happen that at the time perhaps they didn’t exhibit [that tendency], but later on it comes out,” Francis said.

“In consecrated and priestly life, there’s no room for that kind of affection. Therefore, the church recommends that people with that kind of ingrained tendency should not be accepted into the ministry or consecrated life.

“The ministry or the consecrated life is not his place.”

Gay clergy were urged to be “impeccably responsible” in a warning over bad behaviour that was notable for its silence on heterosexual clergy who break their vow of celibacy.

We “have to urge homosexual priests, and men and women religious, to live celibacy with integrity, and above all, that they be impeccably responsible, trying to never scandalise either their communities or the faithful holy people of God,” the pope said.

“It’s better for them to leave the ministry or the consecrated life rather than to live a double life.”

In 2013, just months after assuming the papacy, Francis said: “If someone is gay and is searching for the Lord and has good will, then who am I to judge him?”, signifying a softer tone on homosexuality.

1 ‘It was pitch black’ - Rescued teenager describes night afloat with her cousin in Galway Bay
2 Aaron Brady, the man who said with pride he was a cop killer
3 A million trees, including 400,000 oaks, to be destroyed this week
4 Mike Pence fretting as Kamala Harris shakes up Republicans
5 Nine tenants evicted from north Dublin property by men in masks and dark clothing
Real news has value SUBSCRIBE