Paris attacks: Abdeslam ‘planned to blow himself up’ 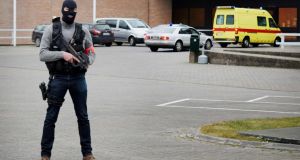 The ambulance believed to be transporting top Paris attacks suspect Salah Abdeslam arrives at the Bruges prison, on as a police officer stands guard at the entrance of the prison. Photograph: Stephanie Demasure/AFP/Getty Images

Salah Abdeslam, the prime surviving suspect for November’s Paris attacks, told Belgian investigators on Saturday that he had planned to blow himself up in November at the Stade de France but changed his mind, the Paris prosecutor said.

“Salah Abdesalam today during questioning by investigators affirmed that, and I quote, ‘he wanted to blow himself up at the Stade de France and that he had backed down’,” Francois Molins told reporters, adding that Abdeslam’s initial statements should be treated with caution.

The prosecutor said that at worst it could take three months for Abdeslam to be handed over to France after the 26-year old said he would oppose extradition to his homeland.

Mr Molins said Abdesalam had played a “central role” in the planning and logistics of the gun and bomb attacks in Paris that killed 130 people.

He cited several trips across Europe in July, September, October and November that included transporting others linked to the attacks.

“His first statements, that we must take with precaution, leave unanswered a series of questions on which Abdeslam will have to explain, in particular, his presence in the 18th district of Paris on November 13th at 22h (10pm),” Mr Molins said.

“He will also have to explain the reasons why he decided to finally abandon his suicide belt.”

Islamic State, which says it carried out the attacks, had in a claim of responsibility described each of the locations struck, including the 18th district of the French capital, where no attack actually took place.

Salah Abdeslam was formally charged on Saturday with involvement in terrorist murder along with a second man detained with him the previous day, Belgian prosecutors said.

The second man was identified as Monir Ahmed Alaaj alias Amine Choukri - both names that investigators have said appear on fake documents.

Belgian prosecutors said Abdeslam and a second man arrested with him on Friday had been charged with “participation in terrorist murder”.

A third man detained on Friday in the same house, named as Abid A, was charged with being a member of a terrorist organisation and aiding and abetting criminals.

A woman detainee, Djemila M, was charged with aiding and abetting but released, the prosecutors said in a statement. A second woman was released without charge.

Abdeslam was earlier released from hospital and taken under guard to appear before the court.

Abdeslam answered questions from Belgian investigators a day after his arrest but will fight extradition to France, his lawyer said.

“He is co-operating with Belgian justice,” his lawyer Sven Mary told reporters outside the judicial police headquarters, adding that Abdeslam, bedridden after being shot in the leg during his capture, admitted being in Paris on November 13th.

His elder brother was among the suicide bombers involved in gun and bomb attacks that night that killed 130 people.