Pakistani schoolgirls struggle back to normality after Taliban attack 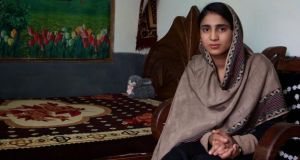 Shazia Ramzan has to ask permission from the two policemen who sit beside the front door when she wants to leave her home.

Four months after the Taliban tried to kill Pakistan i schoolgirl Malala Yousafzai (15), the two girls injured in the same attack are struggling to regain a normal life.

Kainat Riaz (16) and Shazia Ramzan (14) were sitting on either side of Malala Yousafzai squeezed on the bench of a school bus when a Taliban gunman stopped the bus and opened fire on the schoolgirl education activist. Yousafzai was shot in the head and neck. Riaz was shot through her upper right arm and required four stitches. Ramzan was injured in her left hand and shoulder.

After the girls were discharged from hospital and returned to school two months after the attack, they found their lives radically altered.

Riaz sat next to me on a hard sofa in her family’s front room, which serves as both sitting room and bedroom. As we spoke she held a torch over my notebook so I could take notes during our conversation. The power was out – a common occurrence in Pakistan.

“Before, I was a normal girl,” said Riaz. She said she remembered the attack like it was a bad dream. When she tried to write about it in her diary, she found it hard to believe it had actually happened. “Before, I was totally free. Now I am afraid to go out and can’t go anywhere freely,” she said.


Police guard
Outside the front door, three police officers stood guard. Two more stood guard in the alley that runs along the back of the family home. Everywhere Riaz goes her police guard trails her.

Riaz’s father, Riaz Ahmad, a primary school teacher in Amankot, a village on the edge of Mingora city, said he varied his route to work because he had been warned he too had become a target.

On December 4th, 2012, a blast in Riaz’s neighbourhood killed one woman and injured a further six. Police officials said the blast was caused by a gas leak, but many in the community believe it was a targeted attack aimed at Riaz.

“After the blast, the neighbours said that it was because of me and told my father we had to move,” said Riaz, “They said that I would attract more attacks.”

Ramzan lives on the other side of Mingora, down a narrow alley behind Gulshan Chowk, a local marketplace, where her father runs a small bakery. She said local residents also told her father the family had to move because Ramzan posed a threat to the entire community.

Neither family has moved, and Mingora has been relatively peaceful since the October 9th attack. Pakistan’s army has maintained tight control over the area since a 2009 operation to purge the Taliban from the region, which had become their stronghold.

Ramzan has to ask permission from the two policemen who sit in a small alcove beside the front door when she wants to leave her house.

The policemen follow her when she goes to school each day.

“My friends say I am like Kareena Kapoor from Bodyguard ,” said Shazia Ramzan with a giggle, referring to the Bollywood film about a girl who devises an elaborate plan to evade her bodyguard.

Her father, Muhammad Ramzam, said that any time someone came to visit he was meant to tell the police guards - a challenging task in a culture where family members constantly flit between the homes of different branches of the family.

There were sounds of women giggling in the next room. When Ramzan took me through to introduce me to her mother, I found two sisters, a sister-in-law and four cousins sitting in the open-air kitchen. Ramzan’s six-year-old sister and eight-year-old cousin were trying to apply bright pink lipstick to each other, which prompted shrieks of laughter from the watching adults.

In the immediate aftermath of the attack a string of politicians visited the girls in hospital. Pakistani president Asif Ali Zardari said the state would bear the girls’ medical costs.

Riaz Ahmad, Riaz’s father, said the provincial government also promised to help pay for her school fees, and that Rehman Malik, the interior minister, also promised to get Riaz’s 18-year-old brother Zeeshan a job in the local passport office.

The provincial government paid the girls’ medical bills but provided no other support. Zeesham remains unemployed.

“We paid for their treatment and provide them security,” Mian Iftikhar Hussain, information minister for Khyber Pakhtunkhwa, said. “There is nothing else for the government to do.”

Riaz is about to sit her final exams, and hopes to go to college in the autumn. She wants to become a doctor, and her father has said that he will find a way to pay for her to continue her studies.

She said her right arm hurted when she wrote – a frequent reminder of the attack that nearly claimed the life of her best friend.

She believes that Yousafzai will return to Pakistan once she has recovered. Ramzan thinks it is better if Yousafzai does not return to Mingora.

“It is too dangerous for her to return,” she said. “But I don’t think she will forget us.”