Morales back in Bolivia after plane drama over Snowden

Bolivian leader describes incident as ‘an open provocation toward a continent ’ 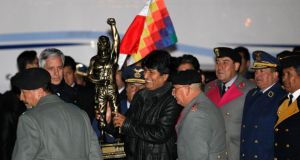 Bolivia’s president Evo Morales (centre) holds a statue of indigenous hero Tupac Katari after his arrival at the El Alto airport in the outskirts of La Paz, last night. Latin American leaders condemned European governments for diverting Mr Morales’ plane on rumours it was carrying a wanted former US spy agency contractor, and announced an emergency summit in a new diplomatic twist to the Edward Snowden saga. Photograph: David Mercado/Reuters 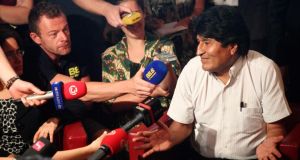 The Bolivian president addresses a news conference at the Vienna International Airport in Schwechat yesterday. Mr Morales said he was awaiting Spanish permission to fly home through its airspace after he refused Madrid’s request to inspect his plane following its diversion to Vienna. France and Portugal abruptly cancelled air permits for Mr Morales’ plane en route from Moscow on Tuesday. Photograph: Heinz-Peter Bader/Reuters 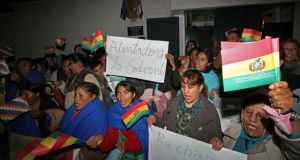 Supporters of Bolivian president Evo Morales protest in front of the French embassy in La Paz over the diversion of president Morales’ plane. Photograph: Bolivian Presidency/Handout via Reuters

Bolivian president Evo Morales arrived home to a hero’s welcome late last night. Mr Morales condemned as a provocation aimed at all of South America the refusal by several European countries to let his plane enter their airspace over suspicions it carried fugitive US spy agency contractor Edward Snowden.

Mr Morales was greeted at La Paz’s airport by his cabinet and cheering, fist-pumping crowds after a dramatic journey from Moscow that ignited a diplomatic furore when his plane had to make an unscheduled stop in Vienna on Tuesday evening.

“This was an open provocation toward a continent, not just a president,” said Mr Morales, his hair strewn with flower petals thrown by people in traditional Andean clothes.

“North American imperialism uses its people to terrify and intimidate us. I just want to say they will never frighten us because we are a people of dignity and sovereignty.”

Other Latin American leaders were also fuming over the plane incident, with heads of state in the 12-nation South American bloc Unasur denouncing the “unfriendly and unjustifiable acts.”

The bloc said a group of leaders from member countries would hold an emergency summit in Bolivia on Thursday to discuss the matter. Unasur includes close leftist allies of Bolivia like Venezuela, Ecuador and Argentina as well as more centrist governments like those in Chile and Brazil.

Earlier yesterday, Bolivia accused the United States of trying to “kidnap” Mr Morales, after his plane was denied permission to fly over France and Portugal.

The Bolivian government said it had filed a formal complaint with the United Nations and was studying other legal avenues to prove its rights had been violated under international law.

Bolivia’s ambassador to the United Nations, Sacha Llorenti Soliz, said, “We have no doubt that it was an order from the White House. By no means should a diplomatic plane with the president be diverted from its route and forced to land in another country.”

The White House declined to comment on the Bolivian allegations.

Mr Snowden was not on the plane when it landed in Vienna, an Austrian official said. He is believed to be stranded in the transit lounge of a Moscow airport and the United States has been trying to get its hands on him since he revealed details of its secret surveillance programs last month.

The furore was the latest twist in a saga that has raised debate over the balance between privacy rights and national security. Accusations of US surveillance on European countries have also strained transatlantic relations.

France said free-trade talks between the European Union and the United States should be delayed by two weeks given tensions over media reports, stemming from the Snowden case, that Washington is spying on the 28-nation bloc.

US president Barack Obama and German chancellor Angela Merkel agreed yesterday to hold talks between their security officials in coming days on US surveillance activities and security issues.

The Bolivian plane was taking Mr Morales home from an energy conference in Moscow when it landed at Vienna airport. Austrian deputy chancellor Michael Spindelegger said Mr Morales personally denied that Mr Snowden was aboard his jet and agreed to a voluntary inspection.

“Based on this invitation from Bolivia, a colleague boarded the plane, looked at everything and there was no one else on board,” Mr Spindelegger told reporters.

Mr Morales’ plane eventually left Vienna and landed in Spain’s Canary Islands for refueling before heading back to Bolivia.

The United Nations said in a statement that the secretary-general understood the Bolivian government’s concerns and urged the countries concerned to discuss the matter.

The Obama administration has advised foreign governments that allowing Mr Snowden to land on their territory could seriously damage their relations with the United States, US and European national security sources said.

The sources said the administration believed such lobbying played a role in persuading countries to which Mr Snowden had applied for asylum to reject or not respond to his bid.

The United States believes its diplomacy also has caused countries whose leaders publicly expressed sympathy for Mr Snowden to have second thoughts about the matter in private, they said.

A spokesman at France’s foreign ministry blamed the incident on “an administrative mishap,” saying France never intended to ban Mr Morales from its airspace and that there were delays in getting confirmation that the plane had fly-over permits.

International agreements allow civilian airplanes to overfly countries without obtaining permission before every flight. But state aircraft, including Air Force One, which carries the US president, must obtain clearance before they cross into foreign territory.

The treatment of the Bolivian military aircraft hit a nerve in Latin America, which has a history of US-backed coups.

In a statement from Peru’s government, which holds the group’s presidency, Unasur expressed outrage and indignation that the plane was not allowed to land in Portugal and France.

“Latin America demands an explanation,” tweeted Ecuadorean president Rafael Correa. “If what happened to Evo does not merit a Unasur summit, I don’t know what does.”

In the Bolivian capital, La Paz, the US Embassy said late yesterday its Independence Day party due to take place today had been put off “until further notice.”

Bolivia is among more than a dozen countries where Snowden has sought asylum and Morales has said he would consider granting the American refuge. But he said earlier this week no request had been made.

The 30-year-old Snowden, who worked for the National Security Agency as a contractor in Hawaii, has been trying since June 23rd to find a country that will offer him refuge from prosecution in the United States on espionage charges.

But his options have narrowed since he arrived in Moscow from Hong Kong with no valid travel documents after the United States revoked his passport.

Five countries have rejected granting Snowden asylum, seven have said they would consider a request if made on their soil, and eight said they had either not made a decision or not received a request.

Russian president Vladimir Putin is unwilling to send Snowden to the United States, with which Russia has no extradition treaty. But he is also reluctant to damage ties over a man for whom Mr Putin, a former KGB spy, has little sympathy.