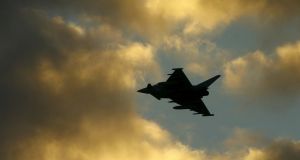 Britain’s entry into the air war in Syria against Islamic State is unlikely to drive the militarised cult from its capital at Raqqa city, the countryside around Aleppo or the oil fields in Deir al-Zor province.

There are two reasons that Britain’s entry will not have a serious impact. Islamic State, also known as Isis, is a territorial movement that has declared conquests in both Syria and Iraq the foundation of its sacred “caliphate”, and will defend these areas against all comers.

The assets Britain is contributing to the US-led effort are limited and will not increase the number of strikes to a level experts argue are needed to make a serious impact on Islamic State forces. Combined US and Russian air strikes in Syria have contained Isis but not deprived it of significant territory.

Over the past 16 months, the US-led coalition has conducted 3,000 strikes exclusively on Islamic State sites in Syria, destroying or damaging 16,000 targets. Ninety-five per cent of these strikes have been carried out by the US.

That percentage will not be reduced significantly by the entry of Britain into the air war.

Since September 30th this year, Russia has also conducted about 3,000 strikes, the overwhelming majority against al-Qaeda affiliate Jabhat al-Nusra and other fundamentalist groups fighting the government. Moscow has stepped up Isis targeting since its Egyptian branch bombed a Russian civilian airliner in October.

Making the case for Britain’s involvement, prime minister David Cameron has argued its air strikes will be in support of 70,000 “moderate” fighters. This figure seems to have been taken from a Spectator article by Qatar-based Brookings Institute expert Charles Lister, who argues there are 25,000 soldiers in the Southern Front (58 factions), 20,000 in the Northern Free Syrian Army (14 factions), plus 20,000 distributed in eight small groups, some 120 factions in all.

These groups, based in eight areas, do not have the common command-and-control necessary for a coherent force, are largely fundamentalist, and often co-operate with al-Qaeda’s Jabhat al-Nusra, regarded as a “terrorist” group by the west.

Finally, their primary foe is the Syrian government rather than Islamic State and it could be difficult to persuade them to give priority to the fight against Isis, which is said to have 50,000 fighters in both Syria and Iraq.

The most powerful militias in Syria are Jaish al-Islam (Islamic Army), founded by Saudi Arabia, and Ahrar al-Sham (Islamic Movement of the Free Men of Greater Syria), which combined have 27,000 jihadi fighters but, as with the so-called “moderates”, Islamic State is not their priority and they are not seen as acceptable allies by the western powers.

The coalition does not want to rely on Syrian Kurdish People’s Protection units, 40-50,000 strong, because they are reluctant to battle Islamic State outside Kurdish majority areas; as well as that, Nato ally Turkey, which opposes Kurdish military action, strongly objects to co-operating with them.

Most western powers, Saudi Arabia, the United Arab Emirates, and Qatar reject co-ordination with the major force on the ground, the Syrian army, which can field 60-70,000 frontline troops, plus 100,000 in the National Defence Forces, thousands of “shabiha” militiamen, and several thousand seasoned Lebanese Hizbullah and Iraqi Shia fighters.

However, France’s foreign minister, Laurent Fabius, has proposed including the Syrian army in the anti-Isis coalition.