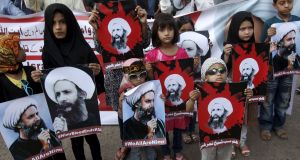 Shia Muslim children hold pictures of Sheikh Nimr al-Nimr, who was executed along with others in Saudi Arabia, during a protest rally in Karachi, Pakistan, yesterday. Photograph: Akhtar Soomro/Reuters

between the two Middle Eastern powers threatened to stoke the flames of a sectarian conflict across the region.

Saudi Arabia executed 47 people on Saturday for planning and carrying out terrorist attacks, including the prominent Shia cleric and activist Sheikh Nimr al-Nimr, triggering riots at Riyadh’s embassy in Tehran.

The US, UN and EU all condemned the kingdom’s executions, while warning countries in the region to avoid escalating religious tensions further.

The Shia cleric’s execution threatens to fuel a power struggle with Iran across the region, particularly in Syria and Iraq where both accuse each other of fanning a sectarian war between Shia and Sunni Muslims.

The situation deteriorated last night as Saudi Arabia said it had severed ties with Iran over the storming of the embassy.

The US department of state said Nimr’s execution risked “exacerbating sectarian tensions at a time when they urgently need to be reduced”. It reiterated the need for leaders throughout the region “to redouble efforts aimed at de-escalating regional tensions”.

UN secretary-general Ban Ki-moon said he was “deeply dismayed” about the executions, adding that the UN “deplored the violence by demonstrators against the Saudi embassy in Tehran”.

EU’s foreign policy chief Federica Mogherini said the Nimr case raised serious concerns “regarding the respect of basic civil and political rights”. She warned it could have “dangerous consequences” for the region.

Iran’s centrist president Hassan Rouhani also criticised Saudi’s rulers for what he called an “un-Islamic act” that he said would fan terrorism and “further tarnish the Saudi image in the world”.

At the same time, Mr Rouhani’s government sought to prevent further escalation by urging protesters to respect diplomatic immunity and not to gather in front of the Saudi embassy, as well as its consulate in the northeastern holy city of Mashhad.

According to the official Saudi Press Agency, Saturday’s executions took place in 12 locations across the kingdom. The statement said the accused – 45 Saudis, an Egyptian and a Chadian – had been found guilty of planning and carrying out terrorist attacks on Saudis, foreigners, diplomats, security personnel and oil installations.

One activist said that 45 of those executed were al-Qaeda members and sympathisers, with the other two being Shia.

Many of the charges related to terrorist attacks that took place during the al-Qaeda insurgency that was put down a decade ago.

The charges outlined in the statement also seemed to refer to claims previously made against Nimr, namely “calling for the shooting of security forces by firearms and throwing Molotov bombs”.

Shia activists have denied that Nimr was involved in violent resistance, but many Saudis argue that his incitement against the government was tantamount to terrorism and often defended his death sentence. – (Copyright The Financial Times Limited 2016)

1 IRFU seek meeting over call to postpone Ireland-Italy match
2 Could Ireland put towns under lockdown if coronavirus arrived?
3 Dublin man may have been stabbed to death by woman in parking space row
4 Why Sinn Féin will not call the State by its name
5 Some ‘very disappointed’ former FF TDs expected when Seanad nominees decided
Real news has value SUBSCRIBE