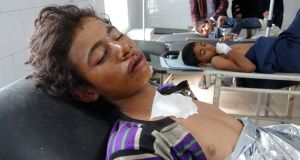 Boys injured in an air raid on a wedding party in Yemen receive treatment at a hospital in Hajjah province on Monday. Photograph: Essa Ahmed/AFP/Getty Images

An air strike on a wedding party, carried out by the Saudi-led coalition waging war in Yemen, killed more than 20 people and wounded dozens of others, including the groom, Yemeni officials said on Monday.

The strike hit an isolated village in northwestern Yemen, where families had gathered to celebrate, late on Sunday. After the attack, people posted online what they said were survivors collecting mangled and charred bodies. One widely shared video showed a young boy clinging to the shirt of his dead father, crying, “No, no, no.”

Saudi Arabia, the United Arab Emirates and other Arab countries, with support from Britain and the United States, have been bombing Yemen for more than three years to try to remove an Iranian-aligned rebel group known as the Houthis from the capital, Sanaa, and to restore the internationally recognised government.

The civil war is part of a larger regional power struggle between the Sunni monarchy in Saudi Arabia and the Shia rulers of Iran.

The conflict has killed more than 10,000 people, displaced millions and caused what United Nations officials have called the world’s worst humanitarian crisis. Yemen was the Arab world’s poorest country before the war, and it now suffers from spreading poverty and a large outbreak of cholera.

Officials from the Saudi-led coalition could not immediately be reached for comment about the air strike, but one told Reuters that it was taking the report “very seriously” and would investigate. Ayman Madhkoor, the head of the health office for the governorate of Hajjah, where the strike took place, said it hit the wedding after dark Sunday, killing at least 21 and wounding more than 50 others. Many of the dead and wounded were children, he said.

Rescue workers struggled to reach the site because of its rugged terrain and because fighter jets remained in the air, spreading fear that more strikes were coming. Eissa al-Rajihi, a Yemeni photographer who said he had visited the hospital where the survivors were taken, reported a painful scene, saying that some of the children were missing limbs or had lost eyes.

About 17 of the wounded were children, he said, and the groom had shrapnel scattered across his body. “He was speechless and appeared in a bad psychological state as some of his relatives had been killed,” al-Rajihi said.

The United Nations has repeatedly criticised Saudi Arabia and its allies for attacks on markets and weddings that have killed civilians, as well as for imposing an economic blockade that has exacerbated the humanitarian crisis. Many Yemenis also criticise the United States and other western nations for selling billions of dollars of weapons to the Saudis and Emiratis, much of which is used in Yemen.

Saudi officials blame the Houthis, saying their fighters hide in civilians areas and divert aid meant for civilians to take care of their fighters. They say they have poured money into Yemen to help the humanitarian response. International peace talks aimed at ending the war have made little progress in years.

Also on Monday, the Houthis announced that the highest-ranking civilian leader of their movement, Saleh al-Samad, had been killed in air strikes by the Saudi-led coalition Thursday. Al-Samad had been the leader of the Houthis High Political Council, which effectively served as the government in Houthi-controlled areas of northwestern Yemen.

He had been leaving a university in the Red Sea port city of Al Hudaydah when he and his entourage were targeted by three air strikes, Abdel-Malik al-Houthi, the group’s leader, said in a televised address.

Six of al-Samad’s aides were also killed, al-Houthi said. In statement released by the Houthi-run Saba News Agency, the group threatened revenge. “The oppressor must be aware that this crime will not pass without an earthshaking and painful response,” it said.