US warns Russia over dangers of military action in Syria

Amateur videos posted on the internet on Wednesday appear to confirm the report of Russian air strikes in Syria, as aftermath footage emerged from Homs and Hama provinces showing alleged air strikes carried out by Russian forces. Video: Reuters 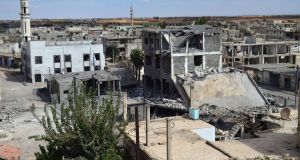 Deserted streets and damaged buildings in the central Syrian town of Talbisseh in the Homs province after Russia confirmed that it carried out its first air strike in Syria. Photograph: Mahmoud Taha/AFP/Getty Images

The White House warned Russia that its military actions in Syria risk prolonging the four-year-old conflict in the country as the US and Russian military leaders spoke about “de-conflicting” the situation.

On the second day of air strikes by Russian planes in Syria, US president Barack Obama’s spokesman Josh Earnest described the actions of the Russians as “indiscriminate”, saying that they risked drawing Moscow further into the conflict.

Separate military operations by the Russians and Americans in Syria have stirred new international tensions over the conflict.

Russia said that its warplanes targeted militants from the radical Islamic State (IS) group, while the US and its allies fear that the air strikes may have struck other opponents of Syrian president Bashar al-Assad, an ally of Moscow.

US Republican senator John McCain said that the Russians had struck Free Syrian Army rebels armed and trained by the Americans.

“Their initial strikes were against the individuals and groups that have been funded and trained by our CIA in an incredible flaunting of any kind of co-operation or effort to conceal what Putin’s first priority is, and that is of course to prop up Bashar al-Assad,” he told CNN. 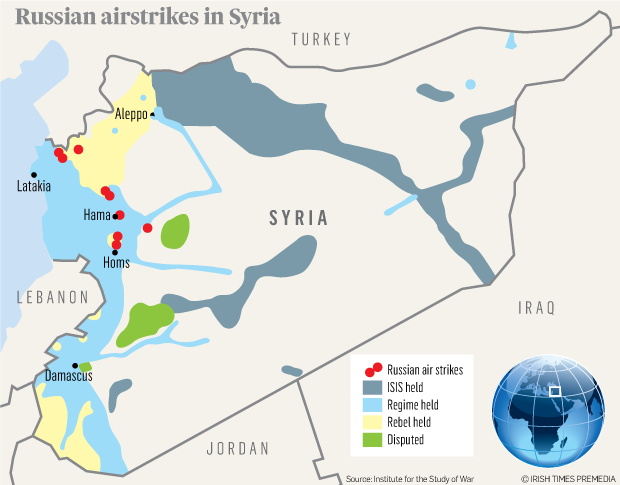 Russia did not consider the US-backed Free Syrian Army a terrorist group, he said; the group should be part of the political process.

Mr Lavrov dismissed reports that Russia had struck CIA-trained rebels fighting Assad. He said that Moscow had no plans to extend the bombing – the first military engagement outside the former USSR since the occupation of Afghanistan in 1979 – beyond Syria.

“We are not planning to expand our airstrikes to Iraq, ” he said. “We are polite people, as you know. We will not come unless we are invited.”

The United States and Russia have clashed on how to resolve the bloody conflict in Syria that has claimed more than 250,000 lives and displaced 11 million people, sending four million migrants and refugees to Europe in the worst such crisis since the second World War.

US and Russian military officials held discussions on Thursday on how to avoid clashes between their respective forces in Syria.

Moscow claimed to have struck 12 positions held by IS over the past two days.

On Thursday, Russian warplanes reportedly hit sites in rural areas of northwestern Syria near the town of Jisr al-Shughour held by the Army of Conquest rebel alliance, which had taken land from pro-government forces in recent months.

Airstrikes were reported on Wednesday around the city of Homs in western Syria near the border of Lebanon, an area not held by IS.

The US, which has been conducting airstrikes against IS in Iraq and Syria for a year, has said that warplanes controlled by the American-led coalition had conducted air strikes over the past 24 hours.

“We have not altered operations in Syria to accommodate new players on the battle field,” US military spokesman Colonel Steve Warren told reporters.

The US only received notice of Russian airstrikes about an hour before they began on Wednesday when a Russian general went to the US embassy in Baghdad to ask that Americans vacate the area where the attacks were due to take place.