US soldier killed and two others wounded in Afghanistan

Afghan government forces, backed by US, have been fighting Taliban in Helmand 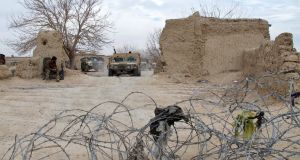 Members of the Afghan security forces prepare to deploy on patrol during an operation against Taliban fighters in Helmand province, Afghanistan. Photograph: Watan Yar/EPA

One member of the US armed forces was killed and another two were wounded in the southern Afghan province of Helmand, where fierce fighting has been going on between Taliban insurgents and Afghan government forces, the US military said on Tuesday.

The US service member died as a result of wounds sustained during operations near Marjah, Brigadier General Wilson Shoffner, spokesman for US forces in Afghanistan, said in a statement.

“We can confirm a US helicopter has landed in Marjah, Helmand Province, and is experiencing mechanical problems. It was not shot down,” added US Army Colonel Michael Lawhorn, spokesman for the Resolute Support mission in Afghanistan.

US special operations troops came under heavy mortar and small-arms fire during a counterterrorism operation, NBC reported. A medical helicopter was hit by mortar fire while it was on the ground during the joint American-Afghan special operations mission, CNN reported.

For more than six months, Helmand has been the scene of battles between insurgents and security forces that have complained of being abandoned by the US-backed Afghan government. The deputy governor of the volatile southern province said in December that Helmand could fall to the Taliban after months of heavy fighting.

US special operations forces have been reported to have taken part in fighting in Helmand in recent weeks. Nato headquarters in Kabul has not confirmed the reports.