US forces land on Mount Sinjar in Iraq

More than 100 US marines and special forces to organise an escape route for 30,000 trapped Yazidis 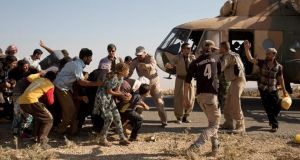 Yazidi refugees wait for a chance to board a helicopter sent by the Kurdish autonomous government to Iraq’s Sinjar mountains. Photograph: Adam Ferguson/The New York Times 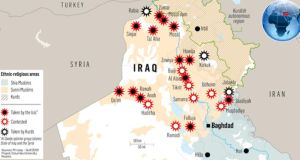 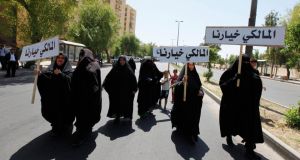 Iraqis carry portraits of incumbent Iraqi prime minister Nuri al-Maliki as they gather in support of him in Baghdatoday. Photograph: Ahmed Saad/Reuters

More than 100 US marines and special forces landed on Mount Sinjar in Iraq today to organise an escape route for 30,000 Yazidi civilians threatened by Islamic extremists as well as starvation.

The forces, which flew in on V-22 Osprey tilt-rotor aircraft that can land vertically, joined a small number of US special forces soldiers who have been on the mountain for some days, assessing the military and humanitarian situation and guiding US air strikes against Islamic State (Isis) fighters encircling the mountain, as well as a handful of British SAS soldiers in the area.

Fleeing Yazidis have reported seeing small teams of US soldiers high on thenorthern flank. “We weren‘t allowed to go near them,“ said a man from Sinjar who was airlifted from the former base. “They were being guarded by the Kurds.”

The US ran a military and intelligence base on a now disused airfield at the top of Mount Sinjar for much of the Iraq war, and the terrain of the rugged 45 mile ridgeline is well known to special operations units. The airfield could be used as one end of an air bridge to fly refugees to safety, if it is impossible to open a land route.

In Washington, the Obama administration was forced to defend itself against accusations of mission creep after admitting that one of the main options under consideration is a direct role for US forces in creating a “humanitarian corridor” for the evacuation.

“[The president] is open to recommendations in which the United States is helping to facilitate the removal of these people from the mountain,” said a National Security Council spokesman, Ben Rhodes.

“If there are additional things we can do as part of an effort to move people off the mountain, he will certainly review those options,” he added.

Pressed on whether this would contradict Mr Obama’s promise to avoid a combat role for US ground troops if the evacuation mission came under attack, Mr Rhodes added: “There are dangers involved in any military operation ... but [the president ]is confident that we can have a limited military objective.“

The US, UK and Kurds have been conducting airdrops of food and water for the besieged civilians, mostly ethnic Kurds of the Yazidi faith who fled to the mountain 12 days ago to escape annihilation by the Isis militants who see them as non-believers.

The UK is also sending Chinook helicopters to help airlift some of the trapped population, which includes large numbers of women and children.

One of the issues the US marines will have to decide is whether the escape route should be by land or air.

Aid officials in the region said that any operation to open a land route would probably require significantly greater number of soldiers - American and peshmerga - than are currently available in the region, as they would have to fight their way across Isis controlled territory to reach Mount Sinjar. That would represent a political problem for Washington. US officials have stressed that the US troops in Iraq will not be involved in combat.

An airlift would be safer but it would take a considerable time to remove all the endangered civilians, and time is short. Aid and human rights officials say the stranded population, estimated to be 20,000-30,000, cannot survive on air drops alone for much longer.

Kieran Dwyer, a spokesman for the UN office for the coordination of humanitarian affairs, said: “It‘s really hot up on the mountain. It‘s pushing 45C in the shade, and there is very little shade. The people are really exposed, and they ran there quickly without taking much with them, so they are in a really tough situation.“

Mr Dwyer, speaking from Irbil, said the Yazidis were spread over multiple locations across the mountain. Those towards the north had a means to walk towards Syria to escape, but he said the walk of at least seven hours was gruelling and dangerous as militants could reach part of the route. Those on the south side were completely hemmed in by Isis militants.

The White House insists fighting Isis to protect its forces during an evacuation is different from seeking it out, which is something that it is leaving to others.

Officials at the Feshkhabour crossing from Syria say at least 1,000 Yazidis crossed into Kurdistan today, adding to the estimated 40,000 who have made the journey since Sunday.

Nearly all are sleeping rough between the border and the city of Duhok, around 100km away.

Exhausted families sheltered in hedge lines just over the bridge that led them to safety, some clinging to infants and elderly men and women who collapsed on to whatever grass they could find. Local officials handed out water.

“At least six people have died in transit due to dehydration and exhaustion in the last three days, and many more have reportedly passed away in the besieged areas of Sinjar,” said Dr Gustavo Fernandez, of Medecins sans Frontieres. “With the situation increasingly critical throughout the country, access to people who are trapped in conflict areas is impossible.”